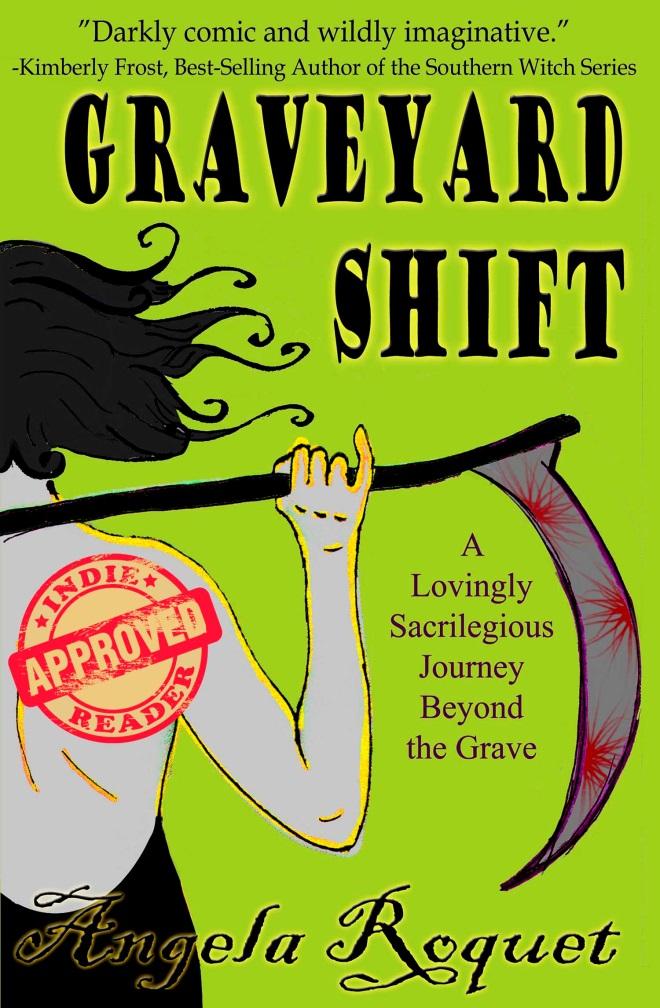 The Inferno has Evolved…

Lana Harvey is a reaper, and a lousy one at that. She resides in Limbo City, the modern capital of the collective afterlives, where she likes to stick it to the man (the legendary Grim Reaper himself) by harvesting the bare minimum of souls required of her. She’d much rather be hanging out with Gabriel, her favorite archangel, at Purgatory Lounge. But when a shocking promotion falls in her lap, Lana learns something that could unravel the very fabric of Eternity. If the job isn’t completed, there could be some real hell to pay.


I have no idea how to start this review! I enjoyed so much and I don't know where should I start?
First I could say I LOVE IT! Now I really don't want to give spoilers but the book is free so maybe I can say a few things.

GOD! Sent me there! or I just read the book  :D
My favorite Characters is well first Lana obviously,Apollo and Gabriel!

It's kind of great for reading this series(yes,it is a Series) because first book is free. So all you need to do is go to Amazon or Barnes&Noble or Smashwords(links on top). THat's it. There's nothing much left to say. Once again I,Love,it!


Excerpt:
“Go help Coreen and Kevin! I’ll take care of them.” Josie fired another arrow through the nearest demon’s eye. Pus exploded from the gaping wound. The beast wailed and clawed at its face before Josie darted it through the skull. A cloud of murky smoke rose in its place. The second demon was quicker. It rolled away from her and scrambled behind a semi. Josie pounced onto the hood of a car and hurried after it.
The sound of traffic crunched in my ears. Angry horns blared as cars and trucks slowed around the charred bridge and missing chunk of railing. Humans may fear death, but they never pass up an opportunity to gawk at it.
I leaned over the wrecked ledge and caught a glimpse of the bus before it disappeared entirely. Kevin and Coreen’s robes laid abandoned on the crumbling bridge. I yanked mine over my head and tossed it next to theirs. It was no good to me in the water. I grasped my scythe in both hands and jumped.
The momentum of the fall pulled me under the icy water, and I found the bus, still bubbling as the remaining air inside tried to escape. I latched onto an open window and pulled myself around to the door.
Inside, Coreen and Kevin cut away the passengers’ seatbelts. Coreen jerked around and then relaxed when she saw it was only me. Kevin’s mop of curls floated around his face, rendered weightless in the dark water. He struggled with a dagger, trying to free the last man. I slipped the blade of my scythe under the buckle and tore it loose from the seat. He gave me a relieved smile, but only a brief one. Air bubbles leaked from the corners of his mouth and he pinched his lips shut again. He grabbed two of the men under their arms and heaved them out the door.
There were only five. One of the band mates must have been driving. Coreen grabbed the next two and left the drummer for me. He was unconscious. The others had a chance of making it out alive, and I hoped they did. We had enough problems. We didn’t need four additional souls to tend to.
Mickey, our catch, was slowly drowning in my arms. This wasn’t how he was meant to go, but I wasn’t about to go to the trouble of saving him just so he could die an hour later. That’s as far as destiny would take him. I was just saving him the extra trauma.
His soul glowed as I pulled it free from his body, and his eyes flashed open in surprise. I pulled him close and wrapped an arm around his waist to keep him from turning back and seeing his body. The shock is too much for some souls. I pulled him out the door and swam towards the ascending bubbles, fleeing for the surface.

Urban fantasy author Angela Roquet is a great big weirdo. She collects Danger Girl comic books, owls, skulls, and random craft supplies. Her obsessions include the Wizard of Oz, over-sweetened coffee, and all things Joss Whedon. She's a fan of renewable energy, marriage equality, and religious tolerance. As long as whatever you're doing isn't hurting anyone, she's a fan of you, too.

Angela lives in Sedalia, Missouri with her husband and son. When she's not swearing at the keyboard, she enjoys painting, goofing off with her family and friends, and reading books that raise eyebrows. GRAVEYARD SHIFT, the first novel in Angela's Lana Harvey, Reapers Inc. series, is now available for FREE on Kindle, Nook, & Smashwords.

You can find Angela online at www.angelaroquet.com

1 signed set of paperbacks open to US Shipping