Spotlight : Left at the Altar Series by Jana Richards


Sarah Stevens experiences a bride's worst nightmare; being dumped at the altar. When she goes on the Caribbean cruise meant to be her honeymoon in order to lick her wounds, she discovers her ex-fiancé has sent his brother, Will Marshall, the former best man, on the cruise as well. Everyone on board thinks they're newlyweds, and Sarah is too embarrassed to set them straight. How is she supposed to share a tiny cabin with a man she barely knows? Even worse, how is she supposed to pretend that she and Will are on their honeymoon? Sarah discovers the best man for her really is the best man....

“You have a beautiful engagement ring,” Josie commented.
Sarah felt her positive resolve slip a little.  She stared at the ring, uncertain why she still wore it.  Did she miss Brad that much, or was it the idea of being married she missed?
“Thank you,” she said simply, hoping Josie would drop the subject.  Apparently, that was too much to hope for.
“Why is it you and Will don’t wear wedding bands?”
“Josie, that’s really none of our business,” Ted rebuked gently.  He took his bride’s hand and planted a tender kiss on each of her fingers.  “We talked about this, sweetie.  Boundaries, remember?”
Ted’s love for Josie shone in his eyes, despite her lack of tact.  He knew all her foibles, weaknesses and plain old stupidities and he still loved her.  Sarah wondered why someone couldn’t love her like that.  She stared at her engagement ring and thought of the day Brad had given it to her.  She’d been so happy and so hopeful of a wonderful future.  But now all her plans and dreams were gone, her hopes of having a family of her own dashed.  How could he have done that to her?
The sob seemed to come from the pit of her stomach, working its way up her body until it just burst uncontrollably out of her mouth.  She covered her mouth with her hand, shocked by the emotion as well as by the tears flooding out of her eyes.  To her surprise she found herself being drawn into Will’s embrace.  She sniffled against his shirt, embarrassing herself further by getting his shoulder wet.
“It’s okay, Sarah,” he whispered.  In a louder voice she heard him speak to the rest of the group who had stopped in mid-chew to stare at her.
“Sarah’s had a very difficult couple of weeks,” he began.  This was it, she thought.  This was where she got outed as a fake bride.  She sucked in a breath.  If he told the truth would he go to jail?  Would she?
“We don’t have any rings because a few days before the wedding the jewelry store where we purchased our rings burned to the ground.  Our rings were lost and Sarah was devastated.  As you can see, she’s still emotional about it.”
Sarah sniffed against Will’s shoulder.  What?
“Oh Sarah, how awful for you!” Josie said.
“But that’s not everything,” Will continued, his voice taking on a serious note.  Sarah stopped sniveling to listen to what he’d say next.  “The wedding dress she’d ordered was lost in transit.  She had to wear a dress off the rack.”
Josie took in a sharp breath.  “No!”
“But the last straw came when a pipe broke at the hall where our reception was going to be held and the place was flooded.  We had to cancel.”
Again, more ohhs and ahhs sounded around the table.  Where did he come up with these crazy stories?
Beatrice chuckled. “I’ve heard some wedding disaster stories, but yours take the cake. Don’t worry, Sarah. Someday you’ll look back and laugh, I promise.”
Gladys raised her glass. “Here’s to Sarah
and Will. May their marriage be luckier than their wedding.”
“Hear, Hear.”
Everyone raised his or her glass in a toast. As Sarah wiped her eyes, Will made a toast of his own. “To Sarah. Nothing but blue skies from now on.” He took a drink from his glass, his blue eyes full of compassion, with a hint of humor twinkling under the surface.
Sarah picked up her wineglass. How had he done that? She knew Will’s stories were more about saving his butt than protecting her from humiliation, but still, she’d rather be thought of as the girl whose wedding blew up then the girl who got dumped at the altar. For that she was grateful.
And how had he made her feel so safe and comforted in his arms? She shivered a little, remembering the gentle touch of his hand sliding up and down her back. For that she was less grateful. She was confused enough already about her feelings.
Sarah reluctantly tipped her glass to Will. “To blue skies.”
_________________________________________________________________


Eight years ago Tony left Olivia at the altar. He was sure she didn't really want to marry him. Now he's back, and they're forced to work together. 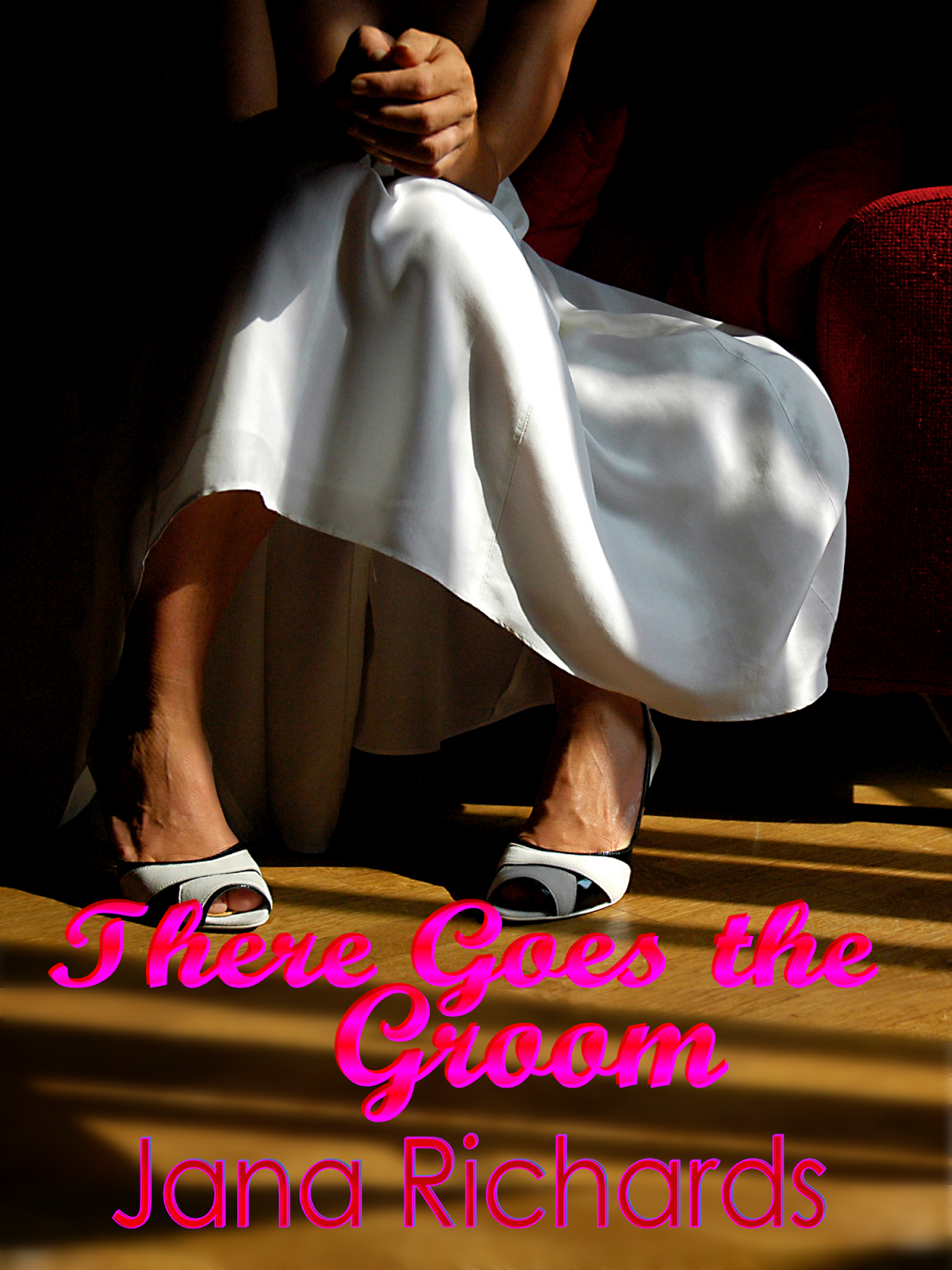 Coming home isn't easy for Tony, because his father wanted him to work at a trade instead of going off to college. Their relationship is still unsteady. Even before Tony's return, Olivia began questioning the depth of her love for her fiancé, a man she chose because he was safe and reliable. Yet the last thing she wants is a loveless, faithless marriage like the one her parents suffered through.


When Tony, who never stopped loving her, insists her fiancé is the wrong man for her, Olivia sets out to prove him wrong. But the sexual chemistry between them is still strong, and so are her feelings for him. Even so, how can she break her engagement, hurt her fiancé as she was once hurt? And how can she trust Tony not to abandon her as he did before?


If anyone does the jilting this time, she will.


She was going to faint. Or throw up. Or trip over her dress. Perhaps all three, possibly at the same time.
Olivia Taylor’s legs trembled as she walked up the aisle of the church on her father’s arm, a smile frozen on her face. Was she out of her mind?  She was barely twenty years old. What did she know about marriage?
Olivia amended that thought. In the past few weeks she’d learned more about marriage than she cared to know. She stole a glance at her father, so tall and distinguished, his smile confident and relaxed, as if he didn’t have a care in the world. Olivia shuddered, her limbs shaking with anger. How could he act as if nothing had happened? How could he pretend nothing had changed?
Everything had changed.
Tony stood at the altar looking handsome in his rented tux. Her heart lightened. Her beautiful, wonderful fiancé. She loved Tony DiPietro with all her heart. He was smart, funny, kind, and his touch sent her hormones into overdrive. Tony was everything a potential husband should be.
But did she want to marry him?
Her bouquet quivered in her hand. Where had that thought come from?  Of course she wanted to marry Tony. She loved him and she knew he loved her.
But was love enough?
She wanted to scream at the little voice in her head to shut up. She forced her smile to shine a little brighter.
Olivia and her father reached the front of the church and her father handed her over to Tony. Tony’s hands were cold and clammy, and she noticed a bead of sweat on his brow. He managed a smile for her and she beamed back at him. Her mother’s voice played in her brain. “Nobody needs to know your world is falling apart.” Olivia felt her smile dim a little.
The minister began the marriage liturgy in a loud, monotone voice, droning on about loving and obeying, forever and ever, Amen. Soon they came to the part where the vows were to be said. Tony and Liv faced each other while the minister recited the vows. Tony repeated the words after him.
“I, Anthony James DiPietro, take you, Olivia Jane Taylor, to be my lawful wedded wife, from this day forward, till death do us part.”
The impact of the words hit Olivia. They were promising to love each other for the rest of their lives. How could anyone make a promise like that? How could she possibly know at twenty how she would feel at forty?
She swallowed and closed her eyes for a moment, thrusting the thought from her mind. All she knew was that she loved Tony. They’d have to figure out this marriage thing as they went along.
Like her parents figured it out?
Something inside Olivia snapped, like an elastic band reaching its breaking point.
What if she and Tony didn’t make it?
The minister continued the liturgy. “Olivia, repeat after me, ‘I, Olivia Jane Taylor—”
“I can’t marry you.”


Dani Dipietro has always considered herself an ugly duckling in a family of swans. She's the bridesmaid her friends count on, but never the woman any man wants for his bride. So she plays the funny girl and guards her emotions, and her secrets, closely.


When Zach Morrison was dumped at his wedding, Dani was there to help him through the humiliation. A year later they meet again and once more Zach needs her help. To fend off the unwanted attentions of his former fiance, he asks Dani to pretend to be his girlfriend. They play their roles a little too well, and make believe turns into reality. But their relationship comes crashing down around them when Zach's trust issues cause him to accuse Dani of cheating. Telling the truth means Dani will betray a friend, something she will never do. But keeping her secrets means she may be destined to remain a bridesmaid forever.

When Jana Richards read her first romance novel, she immediately knew two things: she had to commit the stories running through her head to paper, and they had to end with a happily ever after. She also knew she’d found what she was meant to do. Since then she’s never met a romance genre she didn’t like. She writes contemporary romance, romantic suspense, and historical romance set in World War Two, in lengths ranging from short story to full length novel. Just for fun, she throws in generous helpings of humor, and the occasional dash of the paranormal. Her paranormal romantic suspense “Seeing Things” was a 2008 EPPIE finalist.


In her life away from writing, Jana is an accountant/admin assistant, a mother to two grown daughters, and a wife to her husband Warren. She enjoys golf, yoga, movies, concerts, travel and reading, not necessarily in that order. She and her husband live in Winnipeg with their Pug/Terrier cross Lou and several unnamed goldfish. She loves to hear from readers and can be reached through her website at www.janarichards.com