A long film résumé is not a requirement to play the part of Christian Grey in "Fifty Shades of Grey," but a scruffy blond beard might be. The Irish-born actor Jamie Dornan, like departed star Charlie Hunnam the owner of that aforementioned hirsute flourish, has been cast as the male lead in the adaptation of E.L. James' bestseller.
Variety first reported the news Wednesday evening.
Dornan, 31, has some screen credits to his name, most notably as Sheriff Graham Humbert in the prime-time ABC fairy-tale series "Once Upon a Time." He also had a bit part in Sofia Coppola's "Marie Antoinette." Fans wondering about his marital status will quickly be jealous of English musician Amelia Warner, whom Dornan recently married. 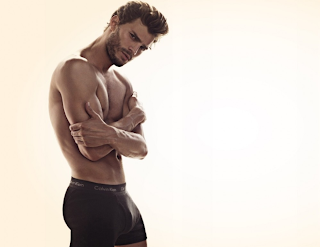 The casting of Dornan -- who will play opposite Dakota Johnson's lead female character -- comes shortly after Hunnam departed the Christian Grey role. Producers and Universal Pictures / Focus Features have been keen to replace him quickly to make a November production start date and an August release.
Michael De Luca is on to produce the adaptation of E.L. James’ sexy bestseller, which is set to bow Aug. 1, 2014.
Dornan is repped by UTA and United Agents.


Let’s see if this one stays, but it’s nice to see a fresh face, so that fans may not respond the way they did to Charlie. Remember, this guy is only getting paid $120,000 for a role that will change his life maybe for the worse.


JAMİE!!! Well he's newbie married and he has been cast for this role.  He can will be play great but what do you guys think?