The latest bundle of hotness is finally here.
Are you ready for more RED HOT sizzle this summer?
This inferno in a box is now available
for instant download at all major online stores.

Enter to win the eBook of your choice from Amazon, up to $10.

This RED HOT box set is jam-packed with the bad boys you love! 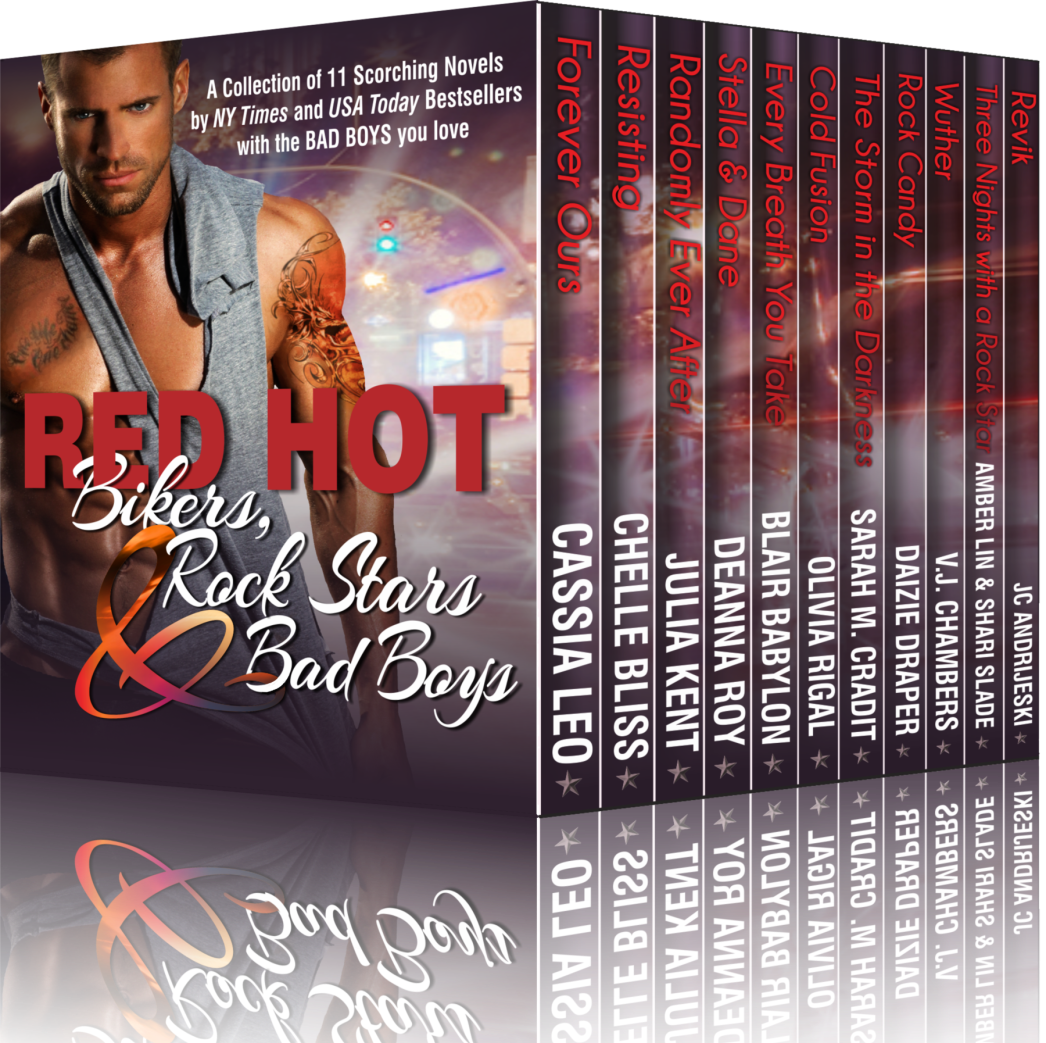 The authors are just as bad as the boys.
Okay, maybe not that bad. But bad.Here are their dirtiest deeds.

CHELLE BLISS: (Sorry, she's too busy writing about the hot men that make you drool.)

JULIA KENT: I once made a bet with a guy I was dating that he wouldn't wear my lingerie underneath his clothes all night when we went to a nightclub with a group...and he did. ;)

DEANNA ROY: When I was writing Stella & Dane, I knew I wanted something to *happen* on the side of the water tower in that small town. My own small town had a water tower exactly like it, but I had never gotten the guts to climb it. When I started writing the scene, I got worried about logistics. Could Stella hold on? Would she would think she would fall? Could it even be done?
I asked my husband what he thought and he mentioned there was a similar ladder on the side of his work building. I was -- no way! But at a party with some friends, they all said -- Go, do it!
They all sat at the ready with cell phones in case we got arrested, and my husband and I went over to the building to figure out if it was possible to do such a thing on a ladder in midair.
Spoiler: It is.
(No authors were arrested in the making of this novel!)

BLAIR BABYLON: After my grandmother's funeral in Southern Arizona, my cousins and I stole the hearse (grandma wasn't in it,) and ended up in Mexico.

OLIVIA RIGAL: (She's so bad, she declined to comment.)

SARAH M. CRADIT: My dirty deeds can be found buried in the pages of my books. And that's all I'll say ;)

DAIZIE DRAPER: I’m very pale, so I spent a whole semester at college doing little things to make my bitchy Freshman roommate wonder if I was a vampire, like dressing emo, wearing sunglasses most of the time (I have light sensitive eyes anyway), avoiding the mirror over the sink (in the room), and acting nervous about the blood (fake) I was always trying to hide. All my well-laid plans worked! She came right out and asked me if I was one. Of course, I denied it and made sure to bug my eyes out like my secret was now out of the bag. She started to really fear me.

V.J. CHAMBERS: All I'm saying is that it involved tequila shots, dancing on a coffee table, and a lack of underwear...

AMBER LIN: There may have been an incident with a parked car, a late night, and a state trooper with a few words. Oh, to be a teenager.

SHARI SLADE: It's possible that during our first year of marriage the husband and I accidentally gave some people a free show at the local drive-in during a Freddy vs. Jason and (I don't remember what the other movie was, we were distracted) double feature. The movies were awful, our parking spot was way in the back, and we didn't realize just how *cough* illuminated we were every time the motion sensor lights came on at the snack bar. Maybe. I'll confirm nothing. Except that we were very sad when the drive-in closed a few years ago.

J.C. ANRDIJESKI: I got in a bunch of trouble with a biker gang once, when I was about 17. Totally bizarre miscommunication, lol...I thought I told my friend I was leaving, but we were both a little out of it and it was a noisy party...anyway, she didn't hear me. She noticed me missing about an hour later and freaked out, got a whole bunch of people out looking for me, including a biker gang, since her boyfriend at the time was a bit unsavory and his pal headed up the gang. I had to avoid that part of San Francisco for quite awhile, since apparently they were pretty mad from looking for me. Meanwhile, I walked to my car, bought a hamburger and was eating it obliviously on the hood of my car and staring up at the stars, having no idea of the ruckus I'd caused.


HERE ARE THEIR STEAMY BOOKS!
ON SALE FOR A LIMITED TIME! Over 1500 pages!

Eleven NYT, USA Today, and top-selling authors have banded together to bring you 11 pulse-pounding books about the bikers, rock stars, and bad boys that we all wish would throw us on the backs of their bikes or hold out their hands from the stage.

From outlaw bikers to filthy rich rock stars and undercover police, we’ve gathered all 11 passionate stories in one big box. This heart-pounding collection is filled with confident, sexy, and swaggering men you’ll fall madly in love with. 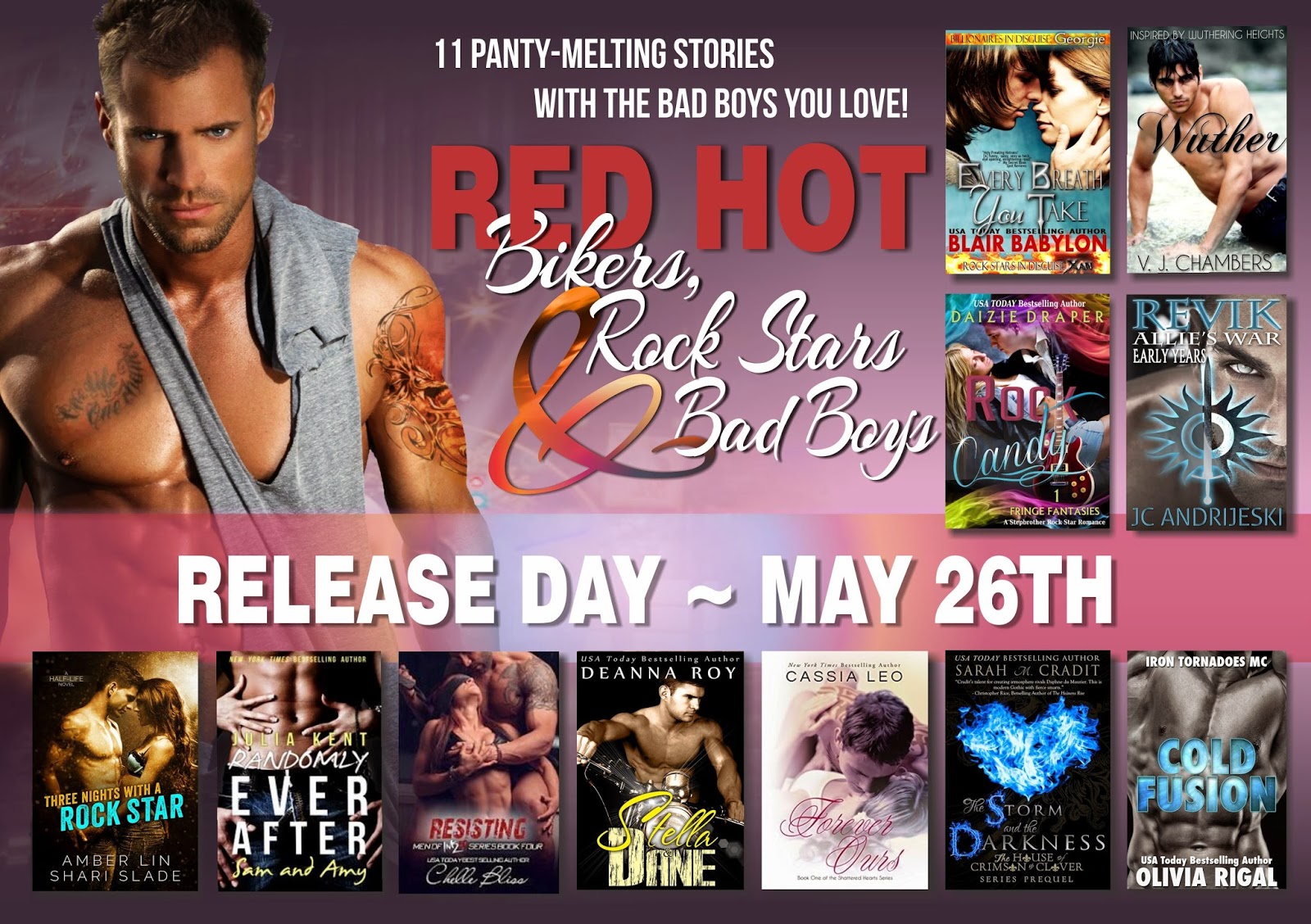 Forever Ours ~ Cassia Leo ~ After 8 years of foster homes, Claire yearns for permanence. Tattooed rocker Chris gives her a home and steals her heart. But will he give up stardom for her?

Resisting ~ Chelle Bliss ~ Ever have a man walk into your life and alter your entire universe? My answer would’ve been no before he tempted me into his bed.

Randomly Ever After ~ Julia Kent ~ An old rivalry threatens Sam's long-planned proposal to Amy when case of mistaken identity makes fists fly. Can a moonlit serenade on a rooftop make up for old mistakes as their future hangs in the balance?

Stella & Dane ~ Deanna Roy ~ When Dane roars into Stella's small town on his Harley, their dangerous romance upsets the locals, leading to an altercation that changes everything.

Every Breath You Take ~ Blair Babylon ~ What happens when a Rock Star in Disguise meets a Billionaire in hiding?

Cold Fusion an Iron Tornadoes MC Romance ~ Olivia Rigal ~ Police detective David is undercover at a club owned by the white supremacist group, but his real challenge may be abiding by the club’s single rule: “No messing around with the talent.”

The Storm and the Darkness ~ Sarah M. Cradit ~ Ana fled to Maine, escaping a dark past. What she left behind is nothing compared to what awaits ahead.

Rock Candy ~ Daizie Draper ~ When her PR firm puts Alexis in charge of fixing a famous band’s image after a fatal DUI, her resolve to keep her panties on and heart safe falters when Danny, the lead singer, starts tugging at both.

Wuther ~ V. J. Chambers ~ Inspired by Wuthering Heights: Heath adores Cathy, his childhood sweetheart. He would do anything to protect her . . . and to possess her.

Three Nights with a Rock Star ~ Amber Lin and Shari Slade ~ When this Sunday school teacher walks on the wild side, a tattooed bad boy rocker demands complete control of her body... for three nights only.

ADD IT ON GOODREADS

Be sure to pick up this bundle of hotness.

Enter to win your eBook of choice
from Amazon, up to $10!

Simply LIKE and COMMENT on this post and spill your dirtist deed. It can be a prank you pulled, something out of character, or a naughty nugget you don't mind sharing. A name will be randomly selected.