Nothing Left to Lose by Kirsty Moseley 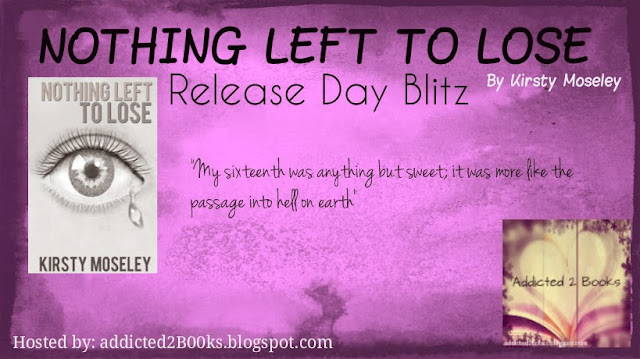 Annabelle Spencer’s life is every girl’s dream. She has wonderful parents, great friends, and of course the perfect boyfriend, Jack Roberts. That all changes on her sixteenth birthday when her life comes crashing down around her. Her dream night turns into a nightmare when Jack is murdered right in front of her, and she’s kidnapped by his murderer, Carter Thomas, a big time drug and arms dealer.


After ten months of being with Carter, she’s found, but the experience has totally changed her. She’s no longer the happy-go-lucky girl that everyone used to know and love; she’s now cold, hard and suffers from night terrors. It appears that Carter broke not only her body, but her spirit too. A shadow of her former self, her slogan for life is now: ‘If you don’t care about anything, then you have nothing to lose’.


Carter is currently serving time for the murder of Jack, a conviction that Anna helped secure. But his retrial is coming up because some key evidence appears to have been tampered with. Unbeknown to Anna, death threats are being received by her father, the Senator. It appears that Carter is still interested in Anna and will stop at nothing to get her back.


Ashton Taylor is brought in to protect her. He’s a newly qualified SWAT agent, a bright spark, the agency’s new golden boy. He is assigned undercover, posing as her boyfriend. His job is to help her through college and keep her safe until the end of the trial in eight months’ time.


For three years she has been the broken, damaged girl, refusing to feel emotion or pain, but can Ashton help her rebuild her life and finally deal with the grief of losing her childhood sweetheart? Will he be the one to make her see that life is, in fact, worth living and that not all men will hurt her?


All the while, the shadow of the trial looms over the both of them, taunting them, reminding them that it isn’t over yet. After all, Carter Thomas will stop at nothing to be reunited with his ‘Princess’.

I was given an ARC of this book in exchange for an honest review from Whairigail @ Addicted2B00ks.

Anna was perfectly happy with a magnificent boyfriend, who loved her unconditionally from the age of 5, loving parents and a life most would covet, but that didn’t stop her from wanting to go to a club the night of her 16th birthday.

That night was end of their happy life.Anna lost her virginity and Jack was murdered.
There's Carter Leader of a crime syndicate,forced to watch kill her beloved Jack right in front of her. Anna was then kidnapped, abused sexually, emotionally and mentally, beat on a regular basis and forced to witness more things than any 16 year old should have. Anna was found, but would forever be changed.
3 years have passed since then...
And Ashton Taylor Aka Agent Taylor. He's Swat agent and he's only 21.Actually he's fresh and his first job is Anna.Anna is now 19,college student.This new job of Ashton going to be difficult.Because she's just her type.

I flicked it open again and looked at the picture of the girl. Fuck, I sure hope I get undercover with her! I mused. She was just my type, dark hair and dark eyes, and she was the prettiest damn thing I’d ever seen.

The job is protect Anna from Carter and his men.This isn't difficult right? And it's only for 8 month.

OMG! From the first chapter I'm emotionally hooked.I was draw into their life and can't get enough to read to the book! They are so lovely also I feel so sad.  This book was written so well that at some points it felt like I was with them. I felt everything.But this is not only for this book.Every book of Kirsty's. All of them is so awesome I can't get enough somehow. She has a 4 books and I own all of them.
She's always be my favorite author.

“It’s very nice to meet you, sir.”
“You too, Agent Taylor. This is my wife, Melissa.” He gestured to the lady on the
couch. I turned and smiled as it clicked into place why she’d looked so familiar when I
stepped into the room. She looked like Annabelle, but Annabelle had a radiant beauty that far
surpassed her mother’s.
“It’s nice to meet you, ma’am,” I nodded.
“You too. Hopefully you’ll last longer than the other near guards; Annabelle needs
some stability,” she said sadly.
Senator Spencer cleared his throat. “So, Agent Taylor, I’ve read your file, and I
must say it’s mighty impressive. Your reputation is incredible at the agency. They have
exceptionally high hopes for you.” He gestured to the couch for me to sit. “You’ve read your
brief, I assume?” I nodded in confirmation and sat as instructed. “Do you have any questions
before you meet Annabelle?”
I nodded. “Only one, sir. I was wondering why you don’t just tell Miss Spencer about
the threats so that she would be more cooperative with her guards. It would be a lot easier to
protect her, and ultimately make her safer, if she were more accommodating.”
Mrs Spencer gasped and the Senator shook his head fiercely. “Annabelle is very fragile.
She doesn’t like to show it, but she’s still grieving for Jack, and what that animal did to her.”
His hand clenched into a fist before he took a deep breath and composed himself. I liked this
guy already. “She can’t be told. She barely copes as it is, she doesn’t need anything else to
worry about on top.” He stood up and walked to his desk, picking up his phone. “Maddy,
could you have Annabelle come in here now, please?”
His face still looked sad with deep pain across it. This man had worries about his
daughter that no father should ever have to go through. I hadn’t thought about them when I
read her file. Thinking about it now though, I realised that they had been through hell too.
Their sixteen year old daughter goes missing, presumed dead, then months later she’s found
broken, abused, and totally a changed person. They had to watch her sink into depression and
attempt suicide and turn into a cold, heartless person, and now they couldn’t even hug her or
hold her hand.
The phone on the desk buzzed, and Maddy’s voice came through the intercom.
“Senator, Annabelle’s here,” she announced.
“Okay, Maddy, send her in,” the Senator answered, glancing at me, his expression
almost apologetic.
A few seconds later she walked into the room. As soon as I laid eyes on her, I knew I
was in trouble. She looked so incredibly vulnerable. Her eyes were cold and distant and held
a pain that I couldn’t bear to think about. She had seen things that no one should ever see.
Carter had broken not only her body, but her spirit too.
Her eyes only flicked to me for a split second and held no reaction whatsoever before
she turned to her father. My heart skipped a beat and my stomach tied in a knot. I wanted
to run to her, wrap my arms around her, and tell her everything would be okay. I wanted to
make her smile and hear her laugh.


**Please note that this book will be available on Amazon but as Amazon do not allow self published authors to put pre-sales up, we have to wait until the 5th to get the link**

UK Only Giveaway a Rafflecopter giveaway

Kirsty Moseley has always been a passionate reader since she was a little girl, devouring books overnight, barely sleeping and paying for it at school the next day. Writing has come similarly to her and once she discovered Wattpad, she finally plucked up the courage to post one of her stories. Seven million reads later, she self-published her debut novel THE BOY WHO SNEAKS IN MY BEDROOM WINDOW, which later became one of 10 Finalists for the 2012 Goodreads' Choice Awards, Best YA Fiction. Shocked and overwhelmed by the response, she later published her second and third novels, Always You and Free Falling.


If she had to sum herself up in one word, it would probably be 'daydreamer' - but unlike most of her school teachers, she doesn't necessarily view that as a bad thing. After all, she read somewhere once that books are like waking dreams....


She lives in Norfolk, England with her husband and son. 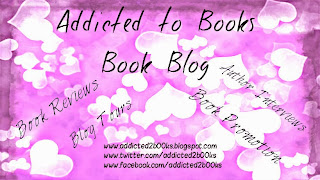