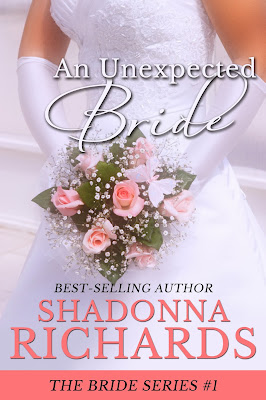 Emma Wiggins is about to marry her heart-stopping, gorgeous boss, CEO Evan Fletcher, in seven days--too bad he doesn't know it yet!

Desperate to fulfill her ailing grandfather's last wish to see her settle down and get married, Emma Wiggins, a 30-year-old, career-focused executive tells him a little white lie on his deathbed that she is in fact engaged--to her boss, deliciously handsome and emotionally unavailable, Evan Fletcher.

The situation takes an unexpected turn when her grandfather's condition improves slightly and to her shock, he goes ahead and arranges a wedding ceremony at his hospital bedside before he passes on. Now, all Emma has to do is convince unsuspecting, commitment-phobic Evan to tie the knot with her in seven days. Can love blossom in the most unlikely situation?

The Bride Series novels and novellas have sold over 260,000 copies in the last year

Ahh EVAN!! You're best!!! his love to her is incredible.
He's so in love to her,it's adorable.
An Unexpected Bride was an unexpected delight to read. It showed the extent to which one may go to ensure the dieing wish of a loved one.
Emma Wiggins is the last member of the Wiggins line. Her grand father; who raised her along with his now deceased wife, is in a long-term care facility facing his own mortality. He is dieing of cancer. He has but one unfulfilled wish. He wanted to see his grand daughter married before he left this earth. So what does a girl do in this instance? Why she fabricates an fiance of course.

Enter the marriage phobic Evan, Emma's secret crush. He is handsome, successful, and built like a god. Now she just has to convince him to marry her. Thankfully he agrees. After all, Emma's not to hard on the eyes herself and he finds himself attracted to her even though he never mixes work with pleasure.Evan Fletcher has grown his little company into a large competitor. With the help of his junior account exec, Emma, he's landed a huge account with Weddings R Us. So what if he doesn't believe in the institution of marriage or commitment for that matter. When Emma tells him that she told a small fib and said that they were getting married, in a week, he at first thought Emma was crazy. But he agrees to go along with the fact marriage. Evan would do just about anything for his junior account exec, because he can't stop thinking about her and thinks he may even be in love with her, although he has no plans to act on those feelings. He wasn't going to fall victim to the Fletcher curse.

But is there a wedding in her upcoming week?? I'm not going to spoil all the fun! Make sure to check out this great read and see what happens to Emma and Evan.

Note: I lost my schedule time.I'm sorry About that. I'm sorry for all of you guys.

Hi, everyone!
I’m Shadonna, author of An Unexpected Bride, a romantic comedy about Emma Wiggins who is about to marry her heart-stopping, gorgeous boss, CEO Evan Fletcher in seven days. Only he doesn’t know about it yet! Since An Unexpected Bride centers around the theme of dream weddings, I thought I’d compile a list some of the most romantic songs for weddings (in no particular order). Check this list out:

Shadonna Richards enjoys reading and writing about the magic of romance and the power of love. She has sold over 260,000 copies of her bestselling romance novels, the Bride Series and Whirlwind Romance Series, in the past eighteen months.

Born in London, England, she has a B.A. Degree in Psychology and a Diploma in Nursing. She is also the author of the non-fiction books, A Gift of Hope, Count Your Blessings and Think & Be Happy: 365 Empowering Thoughts to Lift Your Spirit (an Amazon Kindle #1 Bestseller in Meditation).

Winner of Harlequin's So You Think You Can Write 2010 Day Two Challenge, she is also a member of Romance Writers of America. She's a proud mommy and wife and lives in Canada with her husband and son.