Interview with Falling Into Forever by Tammy Turner 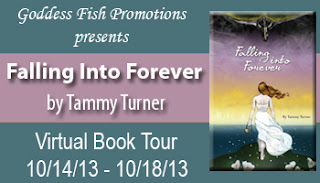 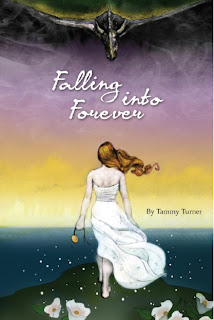 Immortality, thousands of years, and voodoo will make you fall in love . . .

High school senior Alexandra Peyton has a secret admirer with devilish good looks: shoulder-sweeping raven hair, brooding azure eyes, and a ten-foot wing span. But their thousand-year age difference may be a deal breaker for the shy seventeen-year-old. Kraven, the admirer (and immortal victim of an ancient curse), is certain that Alexandra is the reincarnation of his long-dead princess bride.

When Alexandra returns from a road trip to her grandmother’s beachfront estate on the South Carolina coast to the hectic, big-city life in Atlanta, Georgia, she possesses two souvenirs. The first is a once-lost package, sent to her by her now-missing father, which contains a mysterious pendant necklace. The second is a journal filled with the ravings of her dead uncle, an army officer who wrote of meeting the devil during his service in Europe during the final days of World War II.

However, a voodoo priestess who stalks the grounds of Peyton Manor is convinced that the journal will help her conjure the devil and wants the book returned at all costs. As school starts, a vicious wolf man, working for his voodoo mistress, plots an attack on Alexandra. When her life is threatened, the immortal stranger who has vowed to protect her reveals himself and changes her life irrevocably.

Hi Tammy, tell me about yourself?
Hello! Thank you for this opportunity to introduce myself to you and your audience. I
was born and raised in a town named Charleston on the South Carolina coast, but I have
lived in Atlanta, Georgia, since I was a teenager. So I am a southern girl and proud of
it. My day job is in international trade but does not allow any opportunity for creativity.
That is why I love writing. It lets me challenge my active imagination. I also have an
awesome eleven year old son who helps keep me young at heart.

Why did you name your book Falling into Forever?
Falling into Forever was not the first title of the manuscript. At first it was The Dragon
King which sounds too much like a story about hobbits and trolls so it got dropped. I
think the title describes what my protagonist Alexandra Peyton experiences in the novel.
In the first week of her senior year she goes from a quiet, good girl to a brave fighter
when secrets and circumstances beyond her control change her life irrevocably and
forever.

Becoming an author is your dream? How did it start?
I have been writing my whole life. Some kids sing. Some kids dance. My mom always
told me I was a good actress but I think that was polite code for drama queen. From the
time I could hold a crayon in my stubby little fingers I was writing words on construction
paper about my stuffed animals Patty Bear and Hobbes the Tiger. I always wrote poems
or short stories all the way through high school but never shared with anyone. As an adult
I put writing aside for a time to concentrate on being a grown up because I got lost in my
job and responsibilities and being a mom. What I had not figured out was that writing
was just as much a part of me as everything else in my life. It makes me feel whole even
if no one ever reads a word a write. At least I am making the effort to do something I
love.

I read your book’s prologue in B&N and I was hooked! You have a talent. What are
you thinking about your talent?
Thank you! I’m blushing now. I think everyone has some sort of talent, something that
just comes natural. For me that is writing. I don’t think of myself has having some sort of
talent but I know writing is something I have to do and I don’t like to do things halfway.

How did you decide to write this book?
A few years ago I devoured the entire Twilight series in about two weeks. I lost a lot
of sleep and did not go out in the sun until I had read every single last word Stephanie
Meyer wrote. When I was done my imagination was juiced like five year old kid on Red
Bull. I had not written much in years but I felt inspired. So I put pen to paper and went
for it.

Are you going to keep writing? Can we read your books in the future?
The sequel to Falling into Forever is completed and set for release next spring. The title
is The End of Never so please be on the look out for it. Also I am currently working on a
third novel in the same series.

What is your favorite book and favorite author of all time?
My favorite author is the late Kurt Vonnegut. His books are satirical genius. He is my
writing hero.
My favorite book is tough to narrow down. I am looking at my bookshelf now. That
space is reserved for the classics and my all time favorites are old school: Sherlock
Holmes mysteries by Sir Arthur Conan Doyle, Gone with the Wind by Margaret
Mitchell, Shakespeare, mythology, anything a cranky old English teacher assigned you
to write a term paper on in high school. As for books written this century I just finished
reading Abraham Lincoln: Vampire Hunter by Seth Grahame-Smith and was highly
entertained.

What genres do you like to read?
I am willing to try anything and everything except romance and self help. And recipe
books too. I would rather try to decipher IKEA furniture instructions than read those.

Would you like to add something?
Thank you so much for this interview and opportunity to introduce myself. Fall is here
now so I am really looking forward to cozying up with a good book in the cooler weather
and of course to keep writing, writing, writing.

Tammy will be awarding a $10 Amazon GC to a randomly drawn commenter during the tour. 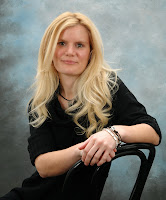 Growing up in the coastal town of Charleston, South Carolina, instilled an infatuation with
history, mystery, and legend in first-time author Tammy Turner. From the time she could shuffle
along behind her father, they would hunt for sharks’ teeth, explore crumbling cemeteries, and
dig for pirate gold along the low country beaches. Attending school in the heart of the city, the
palpable lore of history fed her imagination and inspired her to craft her own stories. An honors
graduate of Georgia State University, Tammy has a degree in journalism and works in the field
of international trade. Now a resident of Atlanta, Georgia, Tammy plans adventures with her son
and capturing the essence of make believe with her writing.