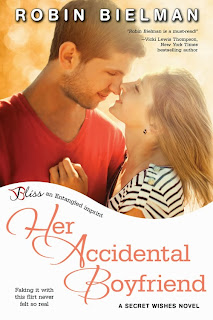 Faking it with this flirt never felt so real...Kagan Owens has a secret. One she thought she’d escaped by leaving New York,but when her past follows her to her temporary new life, Kagan lets a teeny lie slip.And now the town’s biggest playboy and flirt, Shane Sullivan, has become her pretend boyfriend—just until she’s ready to return to NYC. But the handsome, fun-
loving Shane makes it tough to determine where their friendly agreement begins and ends…Shane has no intention of settling down—in fact, his job depends on it, and nothing’s more important than his work. Still, he can’t help but agree to Kagan’s scheme, if only to find out more about the mysterious beauty. But when every touch from her sets his heart and body on fire, he realizes playing an accidental boyfriend may be more than he bargained  for—and more than he can give.

She has a secret. She's city girl and her Father so famous.But this is just one side.The Important side is HER ACCIDENTAL BOYFRIEND is the story of a woman whose wish is to find out what she really wants out of life and in the process finds the one man who will make it his mission to watch her spread her wings and become the woman she is meant to be. Kagan Owens is a big city girl who’s hiding a secret. She’s moved from New York to Cascade, Oregon and is trying to find her way, without her father’s control or influence. Shane Sullivan is the hometown boy of Cascade, Oregon. Shane is known as a playboy. But he’s so much more than what he allows people to see. He has a reason for his playboy ways.And one word  make an accidental.
All Kagan wants to get escape from her old life and make a new one where no one even knows her name. She's a waitress, life is simple and she loves her job. Shane is a frequent customer who can't get his eyes off that waitress. When a person from her past life comes for her she tries to avoid by saying Shane's her man. And With that everythings begin.
I like the book. I really. When I read this book,my only wish I were her. I wish I escape everything.Now I never read any of Robin's book but if like it this book,I'll give a try for her books. And I'm :) She has a strong writing and it's easy to read thought. This is Second Book of secret Wishes and I didn't read other one.This book can be read stand alone.

Robin Bielman lives in Southern California
with her high school sweetheart husband, two
sons, and crazy-cute mini Labradoodle, Harry
(named after Harry Dresden from Jim
Butcher's Dresden Files books). When not
attached to her laptop, she can almost always
be found with her nose in a book. She also
likes to run, hike, and dip her toes in the
ocean. Filled with wanderlust, she longs to
visit many different places and fulfill her curiosity. She wouldn’t mind indulging
her sweet tooth in every location either. She’s a lover of Post-it notes, cable
television shows and café mochas. Writing is a dream come true, and she still
pinches herself to be sure it’s real.
Her other novels include Kissing the Maid of Honor, Worth the Risk, Risky
Surrender and Yours At Midnight. She loves to connect with readers. Learn more
and sign up for her newsletter on her website at http://robinbielman.com. She can
also be found online here: