I probably can’t (or at least shouldn’t) advise anyone on being a rockstar. I realize this might come as a surprise since I just published the novel How to talk to Rockstars, thus asserting my own expertise on the subject. That, and the book is based in part on my own experience as an arts and entertainment writer and editor. This August will mark 12 years officially interviewing touring musicians in a full-time-employment-with-official business-cards capacity.


If you subscribe to Malcolm Gladwell’s 10,000 hours rule (that’s the number of hours of “deliberate practice” it takes to become an expert in any field), then I’ve got more than twice that under my belt — even after you subtract lunch breaks and watching back episodes of “Castle” at my desk. (For the record, I do not watch back episodes of “Castle” at my desk. Who would do that? Not this girl.)


But a 2014 Princeton study supposedly debunked Gladwell’s theory. I’m no expert on rockstars with or without Princeton (or Gladwell) — not on being one, not on talking to one. How to talk to rockstars (the idea, not my novel ... well, maybe my novel, too) is actually an enduring mystery in my life. And I’m OK with that.


In fact, one of the things that keeps me excited about my day job, more than a decade in, is that the creative process in its many genres remains mysterious, elusive, wondrous and inspiring. It’s the wilderness in this world of instant accessibility, constant contact and utter disconnect. Art is the one place where we’re way off the map and, at the same time, completely connected to our source. It’s the antithesis of social media without being antisocial. It’s where we’re most vulnerable, most human, most true.


So maybe that’s what I would say to any would-be rockstars out there. Be more human. Be more of a conduit to that wilderness. Be more authentic; be a beacon to those of us seeking authenticity.


I would also say I know that’s terrifying. Creativity is a scary prospect. Writing a book sure is. To be alone with the blank page is to stare into the abyss. That’s actually thing I’ve said dozens of times for dramatic effect. And I’m probably not the first person to have said it — it sounds suspiciously like something I probably heard from one of my MFA professors and managed to co-opt by virtue of a foggy memory. But lately looking into the abyss is less dramatic and more ... something. Not quite comforting but, like, what’s so terrible about an abyss? It’s not necessarily a black hole or dark matter or one of those “Star Trek” anomalies. It’s just the unknown. And life experience, 20,000-plus hours in, has taught me that most unknowns, once addressed, are completely navigable.


Music, however, refuses to be completely navigable. It remains — at its best, at its richest — unexpected, emotional, surprising and overwhelming. It’s a shot to the heart, a jolt to the psyche. It’s a time machine back to who we once were, a post card from past selves and a missive to future versions of ourself. It has the power to render us, in the moment, undone. It contains the ability to recast us, for the length of a song, cooler than we really are.


I would say to future rockstars, go there. Go farther. Dare into the abyss, into the wilderness, into the world beyond the world. Lead the mission; strike out on a hero’s journey; lean out over the precipice and don’t fear the fall.


The world needs rockstars. Not big egos. That’s not what I’m talking about. But seekers, seers, those who walk on stage, larger than life, and remind us of our own inner starpower. And, for that matter, I’d say that anyone who accepts this mission — to be more true, more human, more creative and more of a light into the dark heart of our collective artistic source — is already a rockstar. No tour bus, logo t-shirts or fan base required. 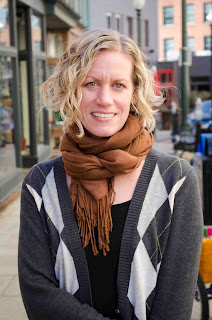 Alli Marshall grew up in Western New York and has called the mountains of North Carolina home for more than 20 years. She's a Warren Wilson College graduate and completed her MFA in creative writing at Goddard College. She's been named the best arts reporter in Western North Carolina in the annual Best of WNC reader's poll, 2011-2014. She received awards in editorial reporting from the North Carolina Press Association in 2005 and 2014, and from the International Festivals & Events Association in 2004. She also took home top honors in the Cupcakes for the Cure bake-off (local ingredient category) — but that’s another story. And though Alli doesn't like to brag or anything, over the course of her career she's interviewed Yoko Ono, Cyndi Lauper, Chris Robinson (The Black Crowes), Aimee Mann, Dan Auerbach (The Black Keys), Britt Daniel (Spoon), Michael Franti, Neko Case, Daniel Lanois, Ziggy Marley, Peter Murphy, Grace Potter, Jamie Lidell, Kishi Bashi and many, many others. 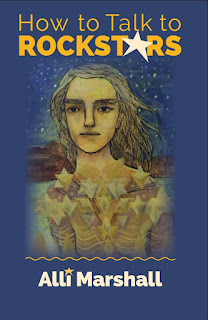 
"How to Talk to Rockstars" — think "Almost Famous" meets "The History of Love" — follows wallflower-turned-journalist Bryn Thompson. She has a dream job: she interviews rock stars.  Bryn’s professionalism keeps her on track, but also emotionally removed from the gritty world of back stage, bars and drugs that she writes about. That is, until she meets musician Jude Archer, whose songs haunt her. As an unlikely friendship grows out of Bryn’s obsession with Jude’s album, Bryn begins to rethink all of the carefully-contrived rules that until now have helped her maintain a professional distance.


At the edge of the stage, in the limbo between darkness and spotlights, between anonymity and fame, Jude Archer knows two things: That he is a rare genius. And that he is a complete fraud.


Sometimes he turns these dual realizations over and over like a penny in his fingers. Sometimes he lets them alternately punish and soothe his soul, these words. One a barb and one a balm. The devil and the angel on his shoulders, but which is which?


Sometimes he lets the needles of knowing fill him with doubt, with hope. With fear, with excitement. And sometimes he just turns away from the knowing, tucks the coin away into a pocket for later.


Just off stage, Jude Archer is no one. It’s the moment of the day he hates most, those few seconds of not being. And then he hears his name.


For one night only —


And he’s already in the light, bathed in it, blinded by it. Soaking it in and becoming. Not just someone, but the one.


All eyes are on him, and he’s reflected back in their fevered glow. The one he’s become. But which one? The genius or the fraud?