#Giveaway & Review : A Bodyguard to Remember by Alison Bruce

A Bodyguard to Remember
by Alison Bruce 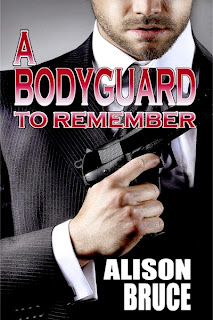 Prudence Hartley has the usual single mom problems: getting her kids to school on time; juggling a gazillion errands while trying to get a full day’s work done; oh, and don’t forget about dinner.But Pru’s problems become a tad more complicated and a lot more dangerous when she finds a dead man in her house. Or a dead spy to be exact. Suddenly, a federal agent named David Merrick shows up and whisks her and her kids into protective custody. Pru has so many questions spinning through her brain she doesn’t know where to begin. How is she going to keep her kids safe? What was the dead spy looking for in her house? Why are the spies after her? Oh, and there’s one more question . . . just a pesky, minor thing. Why does Merrick have to be so damn sexy and protective?


It started with a dead body on my living room floor.


I had just picked up the twins from their father. While they took the recycling bins from the porch to the curb, I unlocked the front door, which led directly into the living room. I turned on the overhead light as I passed the switch, froze, and then pressed my hand over my mouth to stop a scream. Since the man in the middle of the floor could hardly be alive with a gaping hole in the back of his head, I didn't feel obliged to check on him. Holding my breath, I backed out of the house and called my ex to come take the kids back.


“Hold on Boone.” I hooked his sister by her arm and guided them toward the car.
“This is Prudence Hartley at 13 Wildwood Crescent in Guelph. I need the police.”


“Mom?” It was Hope this time, trying to pull away and look through our front window.


Alison Bruce has an honors degree in history and philosophy, which has nothing to do with any regular job she's held since. A liberal arts education did prepare her to be a writer, however. She penned her first novel during lectures while pretending to take notes.
Alison writes mysteries, romantic suspense and historical western romance. Her protagonists are marked by their strength of character, the ability to adapt (sooner or later) to new situations and to learn from adversity.
Copywriter and editor since 1992, Alison has also been a comic book store manager, small press publisher and web designer. In addition to writing, she is the Publication Manager of Crime Writers of Canada, Arthur Ellis Awards Administrator, and part-time tech guru to the technologically challenged.
Alison Bruce has had many careers and writing has always been one of them. Copywriter, editor and graphic designer since 1992, Alison has also been a comic store manager, small press publisher, webmaster and arithmetically challenged bookkeeper. She is the author of mystery, romantic suspense and historical western romance novels.
Links & Stuff
abruce@alisonbruce.ca or writer@alisonbruce.ca
Website: http://www.alisonbruce.ca
Blog: http://alisonebruce.blogspot.ca
Twitter: @alisonebruce
Facebook: https://www.facebook.com/alisonbruce.books
Pinterest: https://pinterest.com/alisonebruce
Goodreads: http://www.goodreads.com/author/show/4860245.Alison_Bruce


GIVEAWAY INFORMATION
Alison will be awarding 2 of her eBooks. Choice of: A Bodyguard to Remember (romantic suspense),Deadly Legacy (mystery) Under A Texas Star(historical western romance),Hazardous Unions (historical romance)or Rawhide and Roses (an anthology with other authors) to a randomly drawn winner via rafflecopter during the tour, and a $10 Amazon or Barnes and Noble GC to a randomly drawn host.