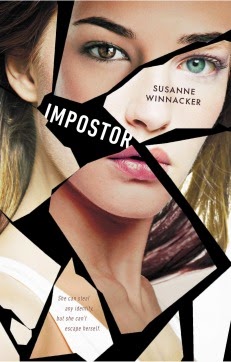 Can Tessa pose as Madison . . . and stop a killer before it’s too late?

Tessa is a Variant, able to absorb the DNA of anyone she touches and mimic their appearance. Shunned by her family, she’s spent the last two years training with the Forces with Extraordinary Abilities, a secret branch of the FBI. When a serial killer rocks a small town in Oregon, Tessa is given a mission: she must impersonate Madison, a local teen, to find the killer before he strikes again.

Tessa hates everything about being an impostor—the stress, the danger, the deceit—but loves playing the role of a normal girl. As Madison, she finds friends, romance, and the kind of loving family she’d do anything to keep. Amid action, suspense, and a ticking clock, this super-human comes to a very human conclusion: even a girl who can look like anyone struggles the most with being herself.

"An unpredictable page turner with shades of terror reminiscent of a Stephen King novel."—VOYA

I went over to the window and pried it open. The frame groaned but with a jerk the window slid up and cool air streamed in. The fresh smell of rain in the night was one of my absolute favorites.
A shadow shifted on the street. I poked my head out. Even in the rain, the hooded stranger waited on the other side, staring at my window. I grabbed my cell phone from the nightstand and the pepper spray from my purse, slipped into my ballet flats and rushed out of the room and down the stairs. Devon appeared in the hall, his eyes bleary. I didn’t stop to explain.
My feet carried me outside where the rain plastered my hair down and soaked through my clothes. The stranger turned the corner as I crossed our front yard.
I pumped my legs. I heard Devon’s steps behind me and his shouts of confusion, but I turned a corner and then another until it appeared that I’d lost him. I stormed into the forest at the edge of our neighborhood, where the stranger had disappeared just moments before.
From up ahead, the sound of twigs breaking kept me on the trail. Devon must have given up or lost sight of me because I didn’t hear him behind me.
Without streetlights, the forest’s darkness was absolute. Rain rattled the leaves, and twigs snapped under my shoes. Shape-shifting while running was difficult and straining, but with Madison’s short legs I’d never catch the guy. Who was he? The killer? And I was alone in a dark forest with him. Maybe not my best plan.
I let the rippling wash over me. Tearing, stretching, twisting, remodeling. My clothes strained and ripped. I stumbled a few times over my lengthening legs but then, with Alec’s body, I gained on the stranger. Wind howled in my ears and for a moment I lost my bearings as he disappeared from view.
Up ahead, something flashed in the blackness like a beacon. He’d turned around to check if I was still following. My breath rasped in my throat as I jumped over a fallen trunk. The forest was cloaked in mist, concealing the outline of the mysterious figure.

Susanne Winnacker studied law before she became a full-time writer. She lives with her husband, two dogs and two bunnies in Germany. She loves coffee (in every shape and form), traveling and animals. When she isn't writing, you can usually find her in the kitchen, experimenting with new vegan dishes.