Vampires: Romance to Rippers an Anthology of Tasty Stories by Scarlette D’Noire and more 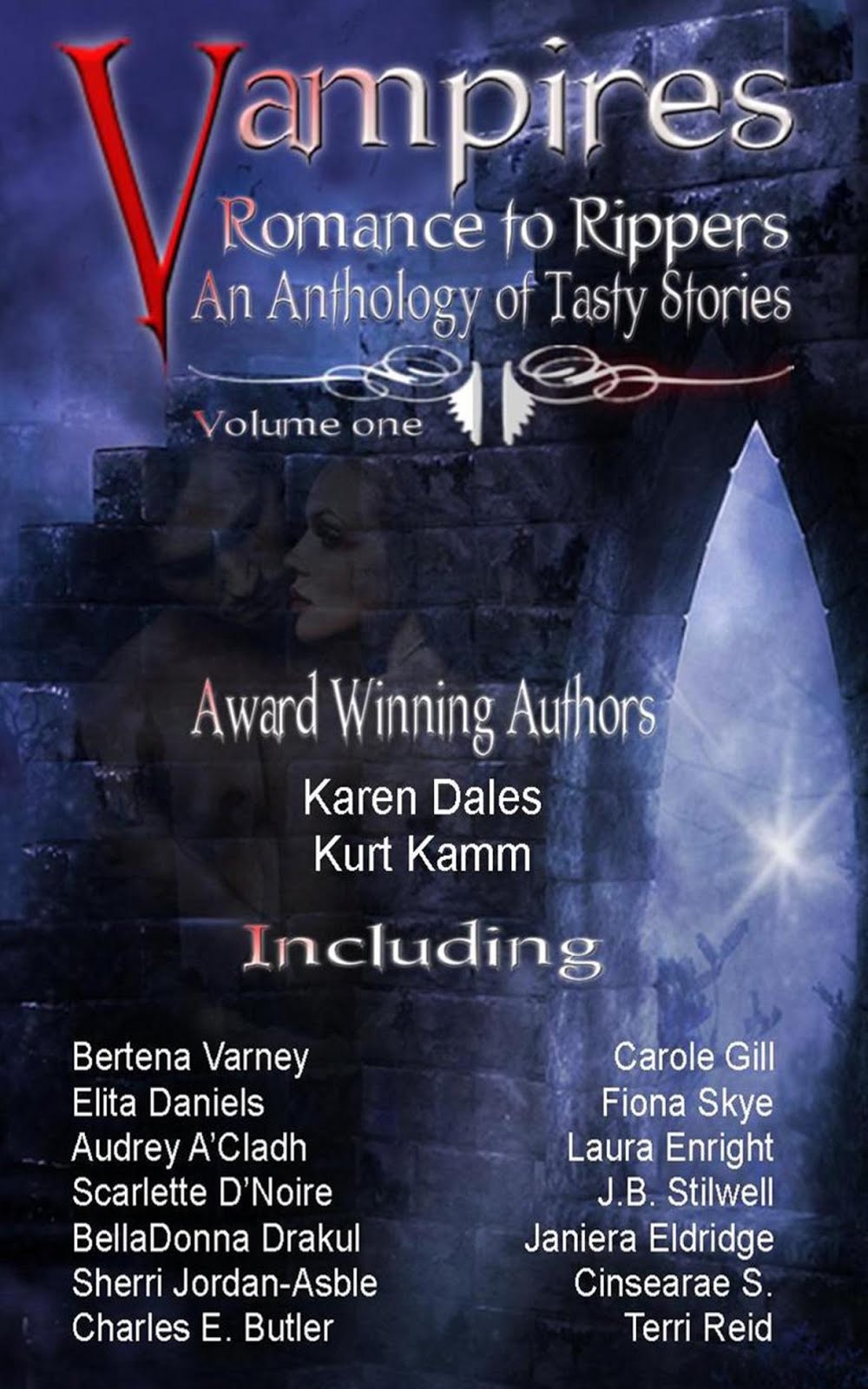 Vampires! Sixteen authors give you a glimpse into the dark worlds of lost love, murderous rage, and undeniable sex appeal where deadly quests and blood lust spanning centuries of time reign supreme. Explore some of the most unique vampires to exist on this side of the grave.

Essays, excerpts, and short stories from award winning authors Karen Dales, Kurt Kamm, Bertena Varney and more. They will entertain you, thrill you, and bewilder you as they reveal the dark secrets of the most beloved creatures of the night, including eleven times bestselling author Terri Reid, creator of the Mary O’Reilly Series.

So, which will it be: the romantic vampire, the revenant vampire, the elemental, the fanged vampire, or the mythological female vampire?  Begin reading and find out!


More Than Friends
An excerpt, of the short story


Grabbing her keys from her pocket, she hurried through the parking lot to her car. She could access her social networking page from home and study the photos without worrying about her Captain looking over her shoulder and reminding her it was just a prank. Her shoes slapped softly against the pavement of the parking lot as she moved forward. With her shadow flitting from car to car, a brisk autumn wind stirred up a pile of dried leaves and pushed them forward to swirl around her feet. The noise was just loud enough that she didn’t hear the soft whisper of wings fluttering behind her.
Pressing the auto unlock button, she stepped forward to grab hold of the door handle when the hairs on the back of her neck rose and she knew someone was behind her. Her hand secreted on the handle of her service revolver, she whirled, ready to fight.
“Whoa there,” the man said, stepping back into the shadows protectively. “Sorry, I didn’t mean to startle you.”
She glanced around quickly and then met his eyes. “Where did you come from?” she asked.
“Originally or recently?” he asked, the touch of irony in his deep voice annoying her.
“Recently,” she growled.
He moved toward her into the glow of a streetlight and she nearly gasped aloud. As it was, her body reacted with a primitive awakening that surprised and even frightened her.
He bit back a smile. He could hear the blood throbbing quickly through her veins, could feel the rise in her body temperature and could smell the sweet pheromones her body was producing to lure him even closer. She was partially aroused by him, but fighting it. And he was charmed by her efforts.
“I was a few cars down,” he said, pointing to a car parked near hers. “I dropped my keys and I was bending over, so I could understand how you might have missed me when you walked to your car. I just came over to make sure you were safe.”
Safe. She had never felt so unsafe in her life.
“I’m fine,” she said, relieved that the words came out clipped and firm.
“Excellent,” he replied, with a full smile. “And now, perhaps we could find a quiet place where I could answer your other question.”
Eyes narrowed, she shook her head. “Other question?”
He stepped even closer and she held her ground. He was not going to intimidate her.
Reaching forward, he ran a finger down the side of her face and she shivered involuntarily and swallowed slowly. “Where I came from,” he whispered, his breath hot on her cheek, “Originally.”
She took a deep, shuddering breath and stepped back, away from him. “Listen,” she replied, her voice uneven. “I don’t know who you are or what you think you’re doing. But I am not a hooker, I’m a police officer. I’m a detective. So unless you want to spend a little time in a cooling cell, I would suggest you step away and take your advances elsewhere.”
His lips lifted in a half smile, but he didn’t move back. “I know you’re not a hooker, Detective Victory,” he said, meeting her eyes. “And the only proposition I have for you right now is an offer to help you track down the person who is killing those women who have requested to be your friend.”
“What the…” Her hand went to her gun, but he stepped even closer and laid his hand over hers, blocking her attempt. Her back was pressed against the side of her car and her hand was caught between her body and his. And the heat coursing through her veins was making her feel lightheaded.
“I’m not here to harm you,” he whispered, keeping an eye out for other police officers who might be coming off shift. “I can help. I think I know why you haven’t been able to find the bodies.”
Shaking her head, she tried to move out of his grasp. “No, I don’t need your help,” she stammered softly. “Now let me go before I scream and you have to deal with an entire precinct of police officers.”
Bending his head, he drew his mouth along the underside of her jaw line and a bolt of heat impaled her core, turning her legs to rubber. She collapsed against the side of her car and he pressed his body fully against hers.
“Did you drug me?” she murmured, trying to fight the sexual haze that was overwhelming her. “I feel…”
He slid his hands up the sides of her body, slowly, caressing every curve, the power of passion clouding his own judgment. “You feel delightful,” he breathed, his mouth hovering just inches over hers. “You feel exactly the way I’ve dreamt you’d feel.”
“Dreamt?” she cried softly, her voice shaking with an undertone of fear.
He looked into her eyes, saw the tears pooling in them, and cursed himself. He could take her; his thrall had broken down all of her natural defenses. But even under the strength of his spell, her unconscious mind had fought back, causing tears to flow in protest. He fought with himself. He could have her; he had desired her for so long. But, a calmer voice reasoned, would he really be satisfied with taking her this way or did he want the whole woman?
He finally shook his head, clearing the passion and stepped away from her, leaving her trembling and confused.
“I don’t…” she stammered.
“Shhhh, it’s okay, JJ,” he crooned.

Originally from Chicago Scarlette D’Noire is an American author currently residing in Florida with her husband and two furry children.


Visit Scarlette and the author contributing authors on the web: