Men Can do Romance by Michael Holloway Perronne

Blurb:
Despite living in free-spirited New Orleans, Elliot finds that his career as an insurance actuary has him constantly weighing the risks of every move he makes in his life. When Troy, his teenage crush, returns home to the Big Easy after a stint with the Marines and unexpectedly announces he’s gay, Elliot must decide if he’s willing to take a chance and find out if men really can do romance.

With this title of the book,I was expecting real good novella. Don't get me wrong I like the book. I gave 3.5/4 but it's not enough for me honestly.
The subject was really interesting and that's why I want to read and reviewed. But the book has a lack,I don't why. Although I love to read long-term crushes but this one didn't impressed me. Sorry.

That’s how I describe my job when someone asks, “Elliot, what the hell is an actuary anyway?”  Sure, I could go into all the nitty gritty details about health care laws I have to memorize and complex mathematical equations I have to solve.  But those four words really summarize it.  I tell a health insurance company how much they should charge you and if you’re even worth the risk.  All day long I decide if whatever is worth taking a chance.  I have to look at things within a black and white world.  There can be no gray.  So how could that not bleed over into my personal life?
Is that low season trip to Thailand during monsoon season worth the risk?
Is the depreciation of the car I like versus the slower depreciation of a car that I’m not so crazy about worth the possible loss in trade-in value?
Is moving to another apartment in a neighborhood that I may like more worth the risk of maybe ending up with shitty neighbors when I like the ones I have now?
Is the man sitting in front of me on a date worth the risk based on what he’s telling me?  For example, he recently broke up with his boyfriend.  Or worse, he still lives with the “ex” boyfriend.
On dates, when I get around to them that is, I find myself unable to stop running the guys against some mental check list to figure out if they…you guessed it…are worth the risk.
Does he seem hung up on an ex?
How long has he been out compared to me, and does he still have wild oats that need attention?
Does he live within ten miles to me?  Because let’s face it, I hate driving long distances on a regular basis.
Will his lack of always chewing with his mouth closed drive me so nuts I may want to scream at the top of my lungs one day in the middle of a meal at Antoine’s?
Is he cuter than me?  And if so, can I risk my somewhat jealous tendencies?
So many questions running through my mind.  All the time.  No wonder I can’t sleep.  No wonder I’m on Prozac for anxiety.  Each day is one long careful thought about is it, this, that, him worth the risk.

It’s a Tuesday evening.  I’m being wild, for me, by being out on a work night.  It’s actually a nice June night in New Orleans.  The humidity isn’t too oppressive.  The stars twinkle above.  I have a nice glass of Merlot I’m sipping while sitting across from a reasonably cute guy.  I’ve actually managed to snag a date.  Okay, a friend set me up, but still.  We met up at a cute outdoor wine bar in the Bywater I’ve been meaning to check out.  Sounds good, no?
The guy’s name is Bailey, and he’s a paralegal.  Check the box off next to the line item that reads “Sustainable Career.”  He has wavy dark hair and blue eyes.  A lethal combination to make my heart skip a beat.  Check off the box next to the line item “Feel at least an inkling of sexual attraction.”
He actually asks some questions about me.  Woohoo!  Check off line item “Seems interested in getting to know me as a person.”
I tell him about growing up in the Garden District and my time spent backpacking across Europe and trying to find myself right after college.  And then…
“You know my ex went backpacking across Europe,” Bailey says, his gaze suddenly appearing to be focusing on some point far, far in the distance.  “He said it was the best time of his life.”
Uh, oh.  Please don’t make me check off a line item in the column for “Run as fast as possible.”
“Have you ever been to Europe?” I ask, trying to bring the conversation back to…you know…us!
“No.  But, Tim, my ex, said that he loved Sweden most of all.  He always had a thing for blondes.  Maybe that’s why…” Bailey says, his voice trailing off.
Please.  No.
I’m not even half-way through my glass of wine, and this guy is making a mad dash for my personal  “move on” line-up.
“Hmmm.  I’ve never been to Sweden.  But I’ve always had a thing for guys with dark hair,” I say not so subtly dropping what I would think would be a huge ass hint.
“We lived in New York for a while.  Before we broke up, and I moved back here,” Bailey says, swirling the Merlot in his glass around and around.
“I still haven’t been to New York,” I say.  “I was thinking maybe of taking a trip there next fall.  Any recommendations?”
Come on, Bailey.  You can do it!  You can move back into the “maybe” column.  For the love of God!  Come on!
“Everything is amazing there.  Everything,” he says still looking off into the distance.  “I remember when I was flying back here after we broke up.  I thought to myself how can you leave this city and this man that you love so much?”
Shit.  I know it’s happened now.  We’ve moved into the so not worth the risk because he’s hung up on his ex-boyfriend to the point that he doesn’t even realize he’s told you more about his ex than himself.
I lean back in the wicker chair I’m sitting in, sip my Merlot, and look up at the twinkling lights in the sky. I start to tune out Bailey as he starts in on how he met the ex.
Oh, well.  Maybe the next guy.  Maybe. 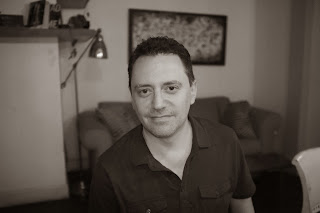 Michael Holloway Perronne is the author of five novels and one novella: "A Time Before Me", "Starstruck: A Hollywood Saga", "Falling Into Me", "A Time Before Us" "Embrace the Rain" and "Men Can Do Romance."  His debut novel, "A Time Before Me" won the Bronze Award, Foreword Magazine's 2006 Book of the Year Award in the Gay/Lesbian fiction category.  In addition, Michael recently released his first travel guide, "The Quickie Gay Guide to Cape Town, South Africa."Michael was born and raised in Mississippi.  He received a BA in Film from the University of Southern Mississippi and a MFA in Drama and Communications from the University of New Orleans.

Giveaway:  One free ebook of Men Can do Romance at each tour stop