$20 Amazon GC #Giveaway! A Deal with Benefit by Susanna Carr 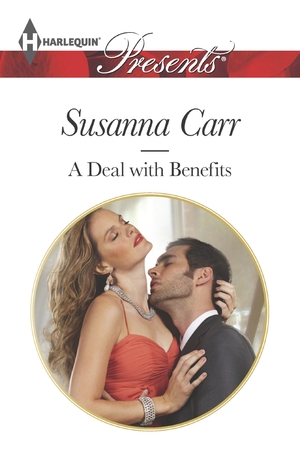 Ashley Jones has been sitting in Sebastian Cruz's office. For hours. Behind the imposing wooden doors sits the man who stole her family's island home. And she wants it back.

But the fight is knocked from her when Ashley recognizes him as the man she knows intimately;the man who betrayed her after their blissful night together.

Sebastian has no intention of giving the island back, but he does want Ashley. He agrees to her deal, but has a few sub-clauses of his own. Specifically, a month at his beck and call; and in his bed!

It's been a while since I read Harlequin.I have a big crush on Harlequin. Back then I read 4 Harlequin book in one day.  But  the ones I read was '80s harlequin. I'm familiar with them but I never read a harlequin book wrote in present.So this one was my explain for my harlequin love.

She had hidden away for years, purposely disconnected from the world and was quiet and contained. None of the guests who came to her house interested her, but this man…this man reminded her of what she was missing.

If we can back the book,I just love reading enemies who fall for each other. It's just a epic.

“I need you,” he said quietly. “You left this giant hole in my life. I can’t sleep. I can’t concentrate. All I do is think of you.”
I keep fallen for the fictional characters...Sebastian is in the list now.
Ashley Jones want to hold her home and Sebastian stole from her.
Now she wants back and Sebastian agree to make a deal...
“How badly do you want Inez Key?”
“Probably as much as you did.”.
“You shouldn’t have told me that.”
“What do you want, Cruz?”
“You.”
First she didn't agreed but she wants her home so badly and in the end she's already agreed...

one month with his bed... I would love to say yes immediately!
Shh! Don't tell my boyfriend :P

It was a quick read. I enjoyed to much. I can't say I love Ashley but her need for her home I really understand.

About the Author
Susanna Carr has been an avid romance reader since she read her first Harlequin at the age of 10. She has written sexy contemporary romances for several publishers and her work has been honored with awards for contemporary and sensual romance.

Susanna Carr lives in the Pacific Northwest with her family. When she isn’t writing, Susanna enjoys reading romance and connecting with readers online.