Too Fast by Alexia Haynes 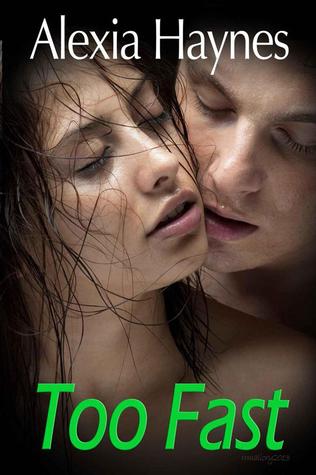 Twenty-year-old Savannah enjoys a one-time one-night stand because a real relationship would never fit into her busy schedule. Working two jobs and pursuing her degree takes all of her time. Besides, the guys she has dated haven't been much better than the random barfly.

It's a good thing Luke's body is honed by the long hours of carpentry and construction because he carries the weight of his family on his shoulders. School hasn't been an option for him since he dropped out to make the house payments his mother had failed to make.

Luke finds what he's been longing for in a night with Savannah. She's determined to stop with a one-night stand, but he wants more. Neither can deny the perfection of their passionate interludes, but with such imperfect lives, do they have any chance for a future together? Suddenly she's losing her heart and it's all happening much too fast.

Not recommended for readers under age 18 due to language and sexual content.

If you give a chance for yourself you'll fall too fast.

The book begins with Savannah and Luke waking up together after a "one-night stand." The problem is Luke wants to see Savannah again. He gets her number, and gives her his. But Savannah is determined to keep it to just one night even though it was the best she ever had.She doesn't have time to date because with two jobs and her studies, she's already busy.
Luke, is good looking but he's also really nice. He's hard-working himself and has lots of responsibilities for a twenty years old guy. Because of his mother and her illness, he has to raise his little sister Natalie (15 years old) and has to take care of everything.

I really love this book. It was great.I loved how Luke took care of his sister, and mother even though his mother didn't deserve it. And Savannah was willing to be there for Luke no matter what.
I absolutely adored every character in this novel, particularly Savannah and Luke, our lovers.Savannah and Luke were some of the toughest and truthful romance characters that I have ever read. They both have serious skeletons in their closets, which affected their daily lives, but they found comfort and solace in the other’s company. When one was suffering, the other was supporting, which reflected a relationship’s idealistic qualities. Moreover, the characters’ flaws made the relationship more believable. No relationship is perfect! Therefore, Savannah and Luke learned to confront their problems and remained true to the other.


This was a wonderful debut novel and I can't wait to read what's next!

I found this book free on Amazon.