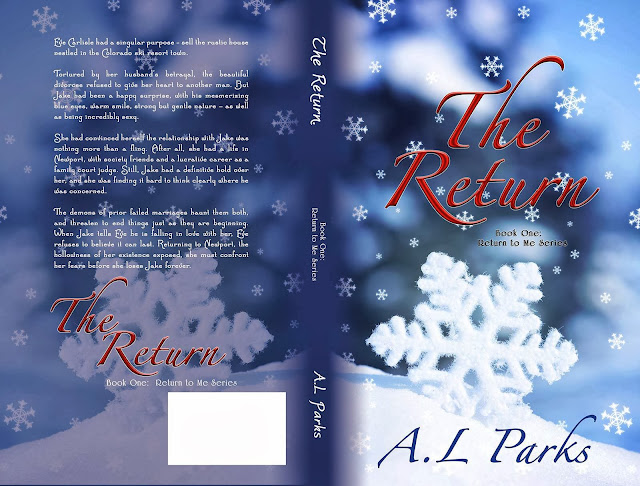 The Return by AL Parks 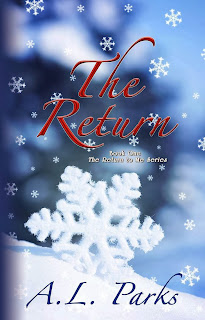 Tortured by her husband’s betrayal, the beautiful divorcee refused to give her heart to another man. But Jake had been a happy surprise, with his mesmerizing blue eyes, warm smile, strong but gentle nature – as well as being incredibly sexy.

She had convinced herself the relationship with Jake was nothing more than a fling. After all, she had a life in Newport, with society friends and a lucrative career as a family court judge. Still, Jake had a definitive hold over her, and she was finding it hard to think clearly where he was concerned.

The demons of prior failed marriages haunt them both, and threaten to end things just as they are beginning. When Jake tells Eve he is falling in love with her, Eve refuses to believe it can last. Returning to Newport, the hollowness of her existence exposed, she must confront her fears before she loses Jake forever.

Excerpts:
She stood in front of the glass case, and pondered which pastry should would get with her coffee. She was starving, and hoped her stomach rumbles were only loud enough for her to hear.
“Eve,” a deep, masculine voice called behind her. She turned, her eyes locking onto the cerulean blue that had made their way into her dreams the night before.
“Hi, Jake,” she said, her voice elevated slightly. Then came the rush of heat to her cheeks. God, could she be more juvenile?
He smiled at her, the corners of his mouth turning up mischievously. Damn, he is all sorts of sexy.
_____________________________

The room went still, neither of them spoke for a moment.  Jake internalized what Eve had said, and realized just how she could have perceived something that was in direct contradiction to what he had felt.  Raising his head, he placed his hand at the back of her neck, and sighed loudly.
“I am so sorry if I gave you that impression.  It was the farthest thing from my mind, I can assure you.  I can’t do the ‘friends with benefits’ thing either and that’s why I left.  I didn’t want you to think I was just interested in getting you into bed.  I mean, don’t get me wrong; I am very interested in getting you into bed,” he ran his hand through his hair, and inhaled deeply.  “But I didn’t want you to think I was just taking advantage of you.  I like you.  I really like you.  And if I could figure out how to take all my vacation time right now, I would spend every minute of the next three weeks with you.”
__________________________________

“Are you hungry?” she asked.
Jake moved her hair out of the way, and placed kisses along her shoulder and up her neck, as his hands flexed against her abdomen.  A barely audible, “yes,” sent quivers through Eve.
“What would you like?” she asked, and ran her hands along his arms.
“You,” Jake said, and pulled her back against him.
_______________________

Jake lightly kissed her at the very lowest point on her back, and slowly made his way along her warm smooth skin.  Soft moans escaped her.  Running his hands up either side of her body, he cupped the outsides of her breasts.
__________________________

The anger in her started to dissipate, and tears rolled down her cheeks.  “I’m desperate for you to stay, Eve.  I cannot imagine you not being here.  What can I do to convince you to give us a chance?  To have an even better life here - with me?  I love you so much.”
“You’ll get over it, Jake.  Trust me.  You may love me now, but what you feel will change.  And then you will leave.”
“Why?  Because that’s what your ex-husband did?” Jake stepped back from her, looking at her with incredulity.
“Because that is what everyone has done, Jake."
______________________