Communion by B. Patterson 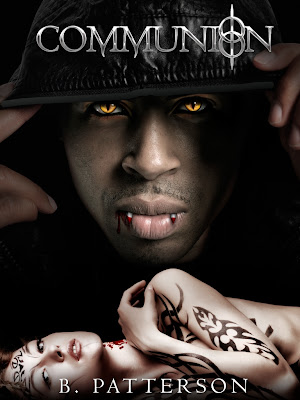 "Lester Fuller knows isolation well.  It has been his only friend since Jadarius Singleton humiliated him last year.  But one night after Jadarius's taunts go too far, Lester stumbles upon Gwynn's body.  He's sure she's dead.  Until she bites him.

Vampires are extinct.  There are only the dhampir.

Now something more than human, Lester struggles to determine where he fits in this new society.  Just what secrets about the dhampir are his friends keeping from him?  And what will he do when a notorious figure from dhampir history sets her eyes on him?"

I really love the characters and storyline! B. Patterson is a great author who fills you with intrigue and suspense at every turn. I really liked Gwen she was my favourite, she was the typical lost teen but at the same time powerful and strong.I liked Communion a lot. Not only does it gives a new twist of the “vampire” tale, but it also deals with some very heavy subjects in a very impressive way. True, Lester doesn’t really have a choice in becoming a Dhampir, but he has the choice of walking away from it – when a Dhampir stops drinking human blood, their extra abilities disappears. Lester chooses to stay as a dhampir for one reason; Jay. All Lester really want is to belong somewhere (even if he claims the opposite), and to be left alone from Jay and his friends. But this isn’t the only problem in Lester’s life. Someone is targeting dhampirs, killing them by draining them dry. But who? And why?

I’m a 25 year old writer.  I’m a graduate of North Carolina State University where I majored in Psychology and minored in Japanese.  I currently live in Maryland.

I wrote a lot as a kid.  I began a new story (or 3 or 4) every school year, but rarely finished them. I finally finished one when I was 16.  It was about ninjas.  It was really bad.

Communion, my first completed novel worth publishing, will be released October 1st. I have that and many other works coming down the pipeline.  I plan to be writing for many years to come.

My values as a writer include:
Writing high-quality books
Diversity
Integrity
Entertainment