Yesterday when explore the internet I found something about comics. In my 19 years life I never read comics or manga. So I say to myself 'why don't I try?'  So I try... Of course  I read some webcomics and everyone should TRY!


I found a list named ' Great MM webcomic ' . So  I like to read MM Romance so I found about MM.
In this post I write something about 'What I read about webcomic?' 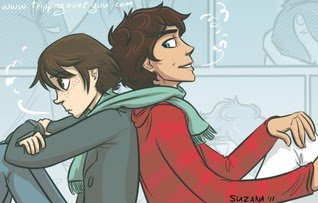 This is my first comics.It's about two friends.

Liam is an anxious person. He doesn't sleep much, is often hot-tempered, is a champion for personal space, and has blood that's more caffeine than plasma. Maybe he'd relax a little if his father would tone down the high expectations.

Milo is bubbly and talkative, which is unfortunate considering the fact he infrequently thinks before he speaks. He enjoys getting a rise out of certain people - and is also the type to snicker endlessly over puns like that.

They are friends like what? 5 years. Milo,the curly one I think he's interesting to Liam about a looong time. First move from Milo (Of course). Every Monday and thursday new pages coming. 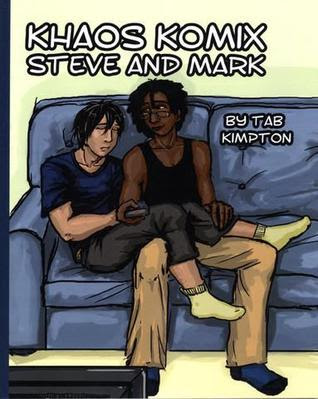 This is a comic about gender and sexuality. It follows the lives of 8 main characters: Steve, Mark, Amber, Nay, Tom, Alex, Charlie and Jamie. It’s about them finding themselves, falling in love, lust and like and how hard they fight to get there.

This comic contains so many issues I can’t even really list them. Some of the things you may find here include: Gays, lesbians, those weird bisexuals everyone is talking about, faggotry, homophobia, transgender issues, dubious consent, body issues, abuse, hate and most important of all, a big old helping of LOVE. There’s a reason I called it Khaos.

The book includes both Steve and Marks stories and covers. It also has a bio for Mark and Steve in the back, including triva stuff like their birthdays and shoe size.﻿

Steve and Mark and Jamie best friends like forever.
İn first comic we read a side of Steve's story.Second comic Mark's Story and 3th two of them.Steve and Mark they feel something..something different.

One day They get drunk and slept together.Next Morning Steve scared to Mark because he thinks that Mark didn't want anything but he misunderstand everything and he escape of him.
And This is their story.

Charlie used a boy and now She's girl( She/he have  breast and penis?) and Jamie's being raped when he's a little boy.Yes they have BİG issues...Are they save each other?This is their story...

I have warn you This is Charlie&Jamie's very sad story.


For today I explain 2 Webcomics.But I read more.Those are I like.Yes I read something that I can say ' I don't like so much '. Laterz..xx <3
Gönderen Unknown time: Thursday, August 01, 2013