Review : Through the lens by Shannon Dermott 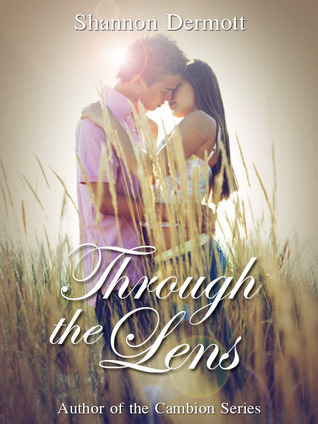 Being a twin isn’t all that bad, nor is it all that good. Being the fat twin makes things a little worse. Seventeen year old, Jessa Shelby has been all but ignored. Trimmed down, but not skinny like her sister, she has decided to make her mark in her final year in high school.

Things begin a new the summer before her senior year when she makes friends with Ethan Hart, a boy with a twisted past, and Allie, his near celebrity status girlfriend, while taking pictures with her new prized possession. Hanging out with them opened her eyes to a lot of new possibilities including Josh Macon, whom she’s secretly crushed on all through high school. No longer the ‘fat girl’, Josh now seems interested in her too.

Long before the day comes to graduate, Jessa finds herself gasping for air. With her vision clouded from tears born of pain as the straps from her precious camera tighten around her throat, clarity sets in. They say that just before you die your life flashes before your eyes. And on the threshold of death claiming her, she finds that partially true. Her flash begins as if to explain just how she ended up on Death’s door. With mere moments left, she has to wonder if trust had come at a very high price.


My Thoughts;
One of my friends named Michele mentioned to me this Author.I thought I give a try.And I'm looking some book to read and one of my other friend named Ali send me this book.The subject is cool.I like it,so I read. I must be sayin that I don't like Ethan. And I don't know why. I think he's weak.He has a w
eak character.This is first to me that not liking a male character. Other things that I want mention I love This  writers Write skill. So easy to read.I like Jessa.She has a 16 years old brother and she has a twin.But they not look like each other. She has a Nerdie Father and Cheerleader Mother. I accepting that her mother is so ... I don't remember that word (shit!)  well I hope  you know what I meant. :)  Meaning that I didn't expect like that mother  also I like it. I like the Father as well.She has a so cool family.


“Because
with you, it will be everything it has never been
with anyone else.”

Born in the north and raised in the south, Shannon Dermott is an author of paranormal romance and urban fantasy for young adults.  Although originally a northerner, she grew up during her formidable years in the southern heat, hanging out and having lots of fun.

It was during those years, she explored her creative side with fictional romance stories about all her teen crushes. Fun times!

Her love for reading constantly conflicts with her need to write.  Interestingly, she reads more police procedural than fantasy or romance.  When not reading or writing, Shannon is going to the movies, hanging out with family and friends, or best of all shopping.  She loves all kinds of music (current and the 80s) and is currently obsessed with Thirty Seconds to Mars.

Just as much love Shannon has for reading is her first passion for numbers and math.
But though it began with her obsession of reading and math, weaving stories won out in the end.