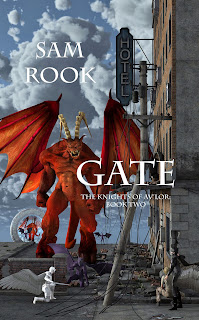 Kathryn returns to Av'lor after seven months on the Daemon home world, only to discover the Daemons have invaded Earth. With Av'lor on the brink of an uprising and an unknown enemy upon its doorstep, the knights divide their forces to safeguard both worlds.

Sir Lanclor, torn between his duty to Av'lor and his dedication to Kathryn, finds himself fighting a losing battle on Earth. He realizes the fate of both worlds rests in the unlikely alliance of technology and magic.

Overwhelmed by a new threat far beyond that of the Daemons, both Av'lor and Earth must face a devastating reality.


"Don’t even think about it." Lanclor glared at her, and then drew his sword and tried to hack through the neck of the Daemon. From the sound of metal hitting stone, he wasn’t making any progress.

"Mel’ati lenk’enterun ent’me’ant f’enk’e’elath shel’an’re." Kathryn focused her mind on his sword and poured fire into its blade. After a dozen chops, the head broke free, and Kathryn angled backward. Not wasting any time, Lanclor scooped her into his arms along with the head and leapt into the sky.

"A’lath ent’yart sel’anthia." Lanclor wrapped the Conceal spell around their group, and he suddenly changed direction to throw off pursuit. Every shift in direction or flap of his wings brought a new wave of agony to Kathryn’s side as the Zahkrinon's head flopped around, its weight supported only by its teeth driven through her armor. She longed to pass out and finally received her wish as they approached the relative safety of dense trees.

Sir Lanclor maintained the Conceal spell as they landed at the tree line and hurried into the forest. He enlisted another knight to hold the Zahkrinon head while he carried Kathryn deeper into the uncertain cover of the trees. Less than 200 feet into the trees, he met up with what remained of the three squads of knights, along with a small group of wide-eyed Earthlings huddled with their backs to a large rock. Their weapons pointed to the ground, but their white-knuckled grip warned of possible hostility.

Sam Rook lives in Vermont with her husband and two children. Her passion for fantasy novels began in high school with her desire to write following shortly thereafter. Software engineer by day, fantasy author by night, she strives to give her readers a chance to enjoy worlds that transport them away from the stress of everyday life.