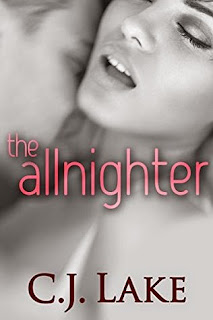 Synopsis:
*Story contains explicit/steamy scenes that are intended for mature readers.
Cady is still reeling from her one-and-done night of passion with a sexy guy she met at a bar—she’s still overwhelmed just thinking about it!—when she unexpectedly comes face-to-face with him again.  It’s bad enough that Mick lied about who he was, but now Cady discovers he’s about to become her…what??!
*Note: The Allnighter is a continuing story.  Stay tuned for Part 2 coming soon!

AUTHOR BIO:
(No author photo available)
C.J. Lake is a storyteller who is passionate about art, surfing, and skiing/snowboarding. Residing near the coast of Massachusetts, C.J. is currently working on a new book. Readers can get in touch via email (writercjlake@gmail.com) or follow C.J. on Twitter @brightbluesurf.


What makes Mick & Cady from The Allnighter such a great couple?
For them it’s very basic: he’s generally laid back and she’s a bit repressed.  That might sound like a clash, but actually it’s perfect, because Mick can get her to relax.  To lighten up—and even be uninhibited.  They are physically attracted to each other from the beginning, and Mick has a way of drawing out Cady’s hidden passion, and disarming her with his confidence.


What should readers know?
The Allnighter is a continuing story.  You will definitely want to stay tuned to see how Mick and Cady’s intense relationship evolves.  What starts as a passionate hook-up, turns into a tension-filled “platonic situation” as they face their parents’ upcoming wedding and try to stay away from each other...


What’s next?
My new book, Sky High, was just released!  Sky High is Book 3 of my Attraction Series.  It’s a standalone novel - an upbeat, sexy story that features Jamie Bardo (a lovable secondary character from Books 1 + 2), and his new neighbor, Sky Dirente, a cynical girl who has had her ski career cut short.  To say sparks fly between them is an understatement!  amzn.to/1FH4O3u
Next up is Part 2 of The Allnighter, coming this summer!!


How can readers reach you?
For quick updates on new releases, follow me on Twitter @brightbluesurf.  Also, readers can always drop me a line at: writercjlake@gmail.com.


“I technically can get a taxi myself,” Cady said, shivering.  “If I couldn’t do that, I’d really be hopeless.”
“Of course,” Mick agreed.  “I just wanted to walk out with you.”  Predictably, the night had grown colder, and now the wind was biting.  Mick boldly put his hands on Cady’s upper arms and gave them a rub through her jacket.  “Let’s warm you up,” he said.
Appearing cautious, Cady asked, “After I go, are you going to meet Quinn and your friends at that party?”
“No.  Definitely not.”
“Not your scene?”
“Nope,” he told her truthfully.
“Yeah, actually I’m surprised your friend, Quinn, wants to go,” Cady mentioned.  “Those parties are usually BU and BC people.  Since he’s twenty-four…”  Again she shivered and Mick put his arm around her.  She seemed momentarily flustered.  “I, um, guess I assumed he’d be over hanging out with college students.”
“Quinn’s very immature,” Mick said—also the truth.  “Listen, Cady, there’s something I want to say…”
Before he got to tell her that he wasn’t really twenty-four and that he didn’t work in private security—that it was a stupid line Quinn used and could they just start over?—he got distracted by Cady reaching up and placing her hand on his chest.  She did so tentatively, and didn’t retract when Mick froze for a second.  His pulse sped up and his chest tightened as she curled the fabric of his shirt into her fingers, silently inviting him closer.
The action sent a signal straight to his cock, which was already stiffening in anticipation.
“This is probably a mistake,” she whispered, obviously trying to talk herself out of what she wanted.  Mick let her talk—though he inched slightly closer, and she didn’t back away.  “It’s just…” she began, her soft voice drifting off for a moment as the wind loudly tousled the trees.
Mick waited, not sure where she was going with this.  And definitely not expecting her to say:
“It’s just that I have no fun.”
After a careful pause, he said, “Are you saying that you want to have fun?”
“Yes.”
“With me?”
She dropped her eyes toward the sidewalk, but clutched his shirt a little tighter.  “Yes.”
He could see a shy grin tugging at the corner of her mouth, so he slid a hand under her jaw to tilt her face up.  When their eyes met, Cady gazed at him for a moment, almost fascinated, then murmured, “Let’s just kiss first and see how it is.”
He might have been mildly amused by her awkward seduction style—if only she didn’t have him totally aroused instead.  “Sure,” Mick agreed, stepping even closer and lowering his head.  Soon both hands were on his chest, gripping the front of his shirt, as their mouths came together…