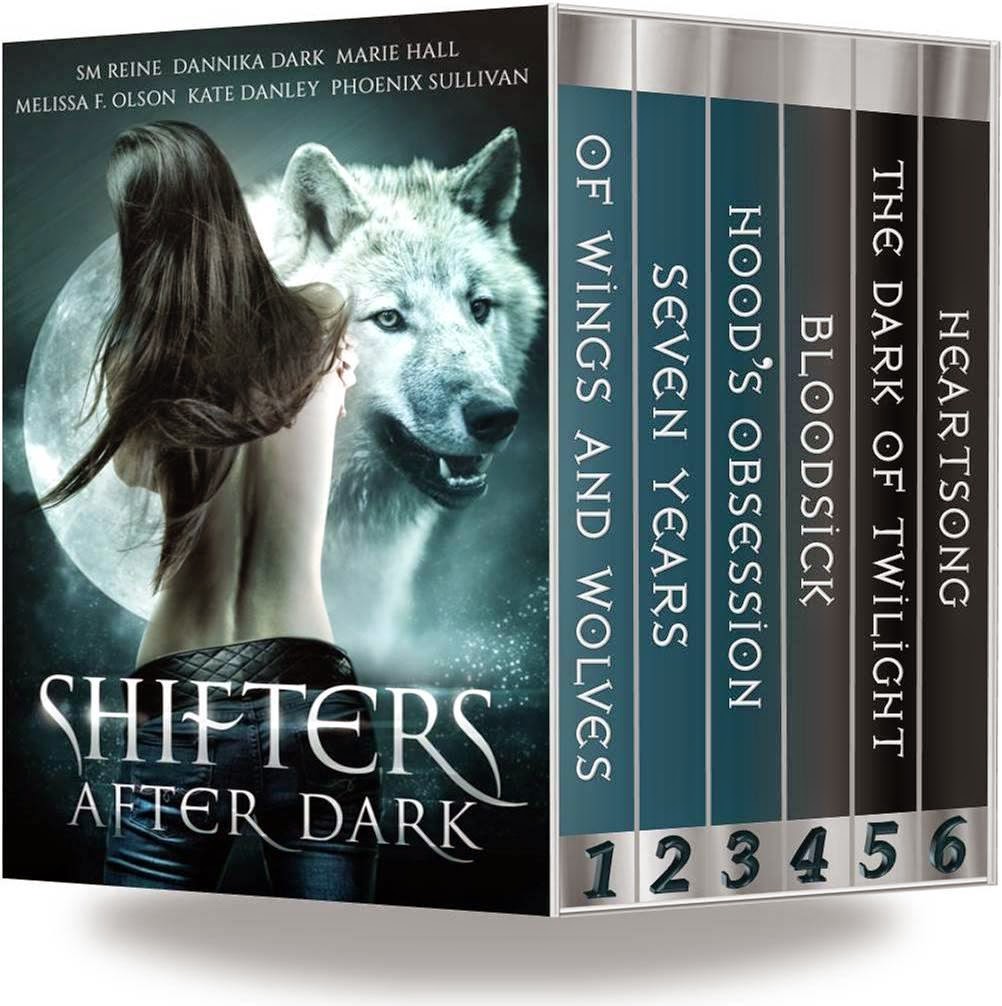 OF WINGS AND WOLVES
by SM Reine
Summer Gresham's unique shapeshifting nature is a well-hidden secret, so the 20-year-old coed is baffled to be singled out for a prestigious internship. She’s even more stunned to discover the man who wants to hire her—Nash Adamson—specifically requested her…and won’t take no for an answer. A rebel angel in exile, Nash has more than a few secrets of his own. Summer is the key to his freedom, and her warmth and beauty stirs something inside of him, almost making him forget he’s imprisoned. Then Summer finds herself at the crux of an ancient war, and angels don’t care how many mortals get caught in the crossfire. Torn between saving Summer and freeing himself, Nash has to choose what matters most: their love, or his freedom.

SEVEN YEARS
by Dannika Dark
Lexi Knight hasn't seen Austin Cole since her brother's funeral seven years ago. Austin's no longer the boy she once knew, but a dangerous bounty hunter with dark secrets. When he reveals to Lexi that he's an alpha Shifter, her world is flipped upside down. But there's a shocking twist no one saw coming, and now her family is in danger. Can Austin salvage a relationship from the ruins of their past? Reality meets Paranormal Romance in this bestselling series about family, second chances, and finding that person who completes you. Cliffhanger-free, HEA, 17+

HOOD'S OBSESSION
by Marie Hall
Lilith Wolf, the daughter of the Big Bad Wolf and Little Red Riding Hood has a problem, she's an unmated female in heat. She has to get away from the males of her village unless she wants to find herself involuntarily hand fasted to the first one to tame her wolf. So when Giles Damien comes to her calling due the pact she'd signed with Rumpelstiltskin years ago, she doesn't really think twice about the fact that she'll be journeying to Fyre Mountain. Even though that means she'll be crossing paths with an angry water dragon, a pub full of rowdy Merry Men, and rock dwarves with a taste for flesh... but she'd never counted on falling in love. These are the other fairy tales no one ever told you about...

THE DARK OF TWILIGHT
by Kate Danley - Boxed Set Exclusive
Aein always longed to become a member of Lord Arnkell's army, ever since she was a child working in the stronghold's kitchen.  When that day finally comes and she is sent to patrol the border's swamp with fellow warrior, Lars, it seems like her dream has come true.  But something has followed her home.  When Lord Arnkell's wedding is interrupted by a werewolf attack, the dream shifts into a nightmare… and Aein is the only one awake. Book One in the brand new epic fantasy series Twilight Shifters.  A boxed set exclusive!

BLOODSICK
by Melissa F. Olson
All her life, Sashi’s mother warned her not to get involved with werewolf problems. But Sashi, a witch who uses her magic to help cancer patients fight their illness, has never made a habit of ignoring pain. When she meets an abused shapeshifter that no one else seems willing to help, Sashi will risk everything –including her fledgling relationship – to save a woman who can’t save herself. An Old World novella from the author of Dead Spots, Trail of Dead, and Hunter's Trail.

HEARTSONG
by Phoenix Sullivan
By night, in her Gabriel Hound form, Brinn runs with The Wild Hunt. When she's unwittingly thralled by brother princes Alain and Pellinore, only one thing can free her: the blood of her captors. But freedom is not so easily won as the three of them form a grudging bond that soon turns intimate. Love should be easy, but The Wild Hunt wants Brinn back, the Questing Beast wants Pel, and Alain wants the impossible--to keep them both at his side. (an Arthurian-era fantasy, 17+)

SM REINE
SM Reine is an author of paranormal and urban fantasy from Reno, NV best known for "The Descent Series," which is about an exorcist on the run from God. She likes long walks on the beach, overcast days, total mayhem, and kittens.

DANNIKA DARK
Dannika Dark is a USA Today Bestselling author of urban fantasy and paranormal romance. She was born on a military base in the U.S. and traveled the world before she was nine. Now she’s rooted in the south with her head firmly in the clouds. At age twelve, Dannika began writing post-apocalyptic stories. That passion evolved to poetry and song lyrics, but it wasn’t until years later that she realized her passion for writing fantasy. When Danni is not writing, she enjoys a great sci-fi or fantasy movie, Tex-Mex, heaps of chocolate, and unleashing her dark side.

MARIE HALL
Marie loves books that make you think, or feel something. Preferably both.
And while she's a total girly girl and loves glitter and rainbows, she's
just as happy when she's writing about the dark underbelly of society.
Well, if things like zombies, and vampires, and werewolves, and mermaids existed. (Although she has it on good authority that mermaids do in fact
exist, because the internet told her so.)

She's married to the love of her life, a sexy beast of a caveman who likes to refer to himself as Big Hunk. She has two awesome kids, lives in Hawaii, loves cooking and occasionally has been known to crochet. She also really loves talking about herself in the third person.

If you want to see what new creations she's got up her sleeves check out
her blog: www.MarieHallWrites.blogspot.com or contact her personally at mariehallwrites@gmail.com
Author Links:
Goodreads
Twitter
FBPage

KATE DANLEY
Kate Danley's debut novel, The Woodcutter (published by 47North), was honored with the Garcia Award for the Best Fiction Book of the Year, the 1st Place Fantasy Book in the Reader Views Literary Awards, and the winner of the Sci-Fi/Fantasy category in the Next Generation Indie Book Awards. Other titles include: Queen Mab, the Maggie MacKay: Magical Tracker series, and the O'Hare House Mysteries.
Her plays have been produced in New York, Los Angeles, and DC Metro area. Her screenplay Fairy Blood won 1st Place in the Breckenridge Festival of Film Screenwriting Competition in the Action/Adventure Category. Her projects The Playhouse, Dog Days, Sock Zombie, SuperPout, and Sports Scents can be seen in festivals and on the internet. She trained in on-camera puppetry with Mr. Snuffleupagus and recently played the head of a 20-foot dinosaur on an NBC pilot.
She lost on Hollywood Squares.

MELISSA F OLSON
Melissa Olson was raised in Chippewa Falls, Wisconsin, and studied film and literature at the University of Southern California in Los Angeles. After graduation, and a brief stint bouncing around the Hollywood studio system, Melissa landed in Madison, WI, where she eventually acquired a master's degree from UW-Milwaukee, a husband, a mortgage, a teaching gig, two kids, and two comically oversized dogs, not at all in that order. She loves Madison, but still dreams of the food in LA. Literally. There are dreams.

PHOENIX SULLIVAN
Phoenix Sullivan has been publishing fantasy and science fiction stories under her various pen names before most of you were born. Marion Zimmer Bradley was her first editor. Today she's General Manager for Steel Magnolia Press, helping to bring sexy, thrilling, and fantastical stories to ereaders near you.

In days gone by, Phoenix was a registered vet tech, working with small animal clinics and wildlife rehab centers. She lives now on a Texas farm, sharing her days with a small herd of ponies, three dogs, two cats, a goat, some chickens and the occasional rat snake. Life doesn't get much better...

Sign up for Fresh Leaves, the Steel Magnolia Press newsletter, for the latest in new releases and great deals.
http://steelmagnoliapress.com