Guest Post : Take a bite out of the paranormal by Sunrise Over Brasov 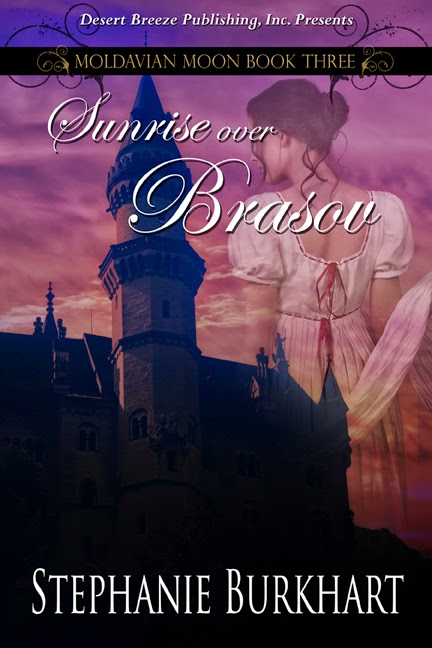 Rosa Getzi lives a life of intrigue at Poiana Brasov with Clement, a werewolf, and Cassandra, the witch. Her past doesn't matter to her – until she discovers what it holds.

Prince Michael Sigmaringen joins his sister-in-law, Caroline, and the vampire prince, Darius, in a daring rescue, igniting Rosa's desire to find her family. However, all is not as it appears. Rickard, Rosa's friend, escapes with her. Clement will go to any lengths to get Rosa and Rickard back.

At Darius' fortress, Michael soon discovers Rickard is a new breed of werewolf – one who can control the change, and Clement hopes to exploit Rickard's abilities.

Michael's courage, strengths, and convictions will be tested like never before. Can Michael and Rosa find true happiness and the rid the lupine haunting of the Sigmaringens once and for all?


EXCERPT
He raised his hand and lowered his hood. An inherent strength filled his profile. Confidence. Concern. Relief.

Rosa's breath jammed in her throat. He looked familiar. He smelled familiar.

"I'm not going anywhere with you."

A frown set against his rugged features. "I don't have time to argue -- now put on a warm dress and cloak."

"No." She was not going anywhere with him despite the relief in his voice.

He sighed and shut the door. Moving with fluid grace, he crossed the room, jerked the door to her closet open and threw the items he wanted her to wear on her bed. "Get. Dressed."

"No." She was determined not to budge, despite the danger outside.

"Why would you want to stay? Clement kidnapped you."

Disconcerted, she pointedly glanced away from his hard stare. What did he mean by kidnapped? Clement didn't keep her behind bars and feed her only bread and water. Rosa could even go into Brasov to shop as long as Lucien or one of the bodyguards went with her.

"I'm going to take you back to your mother."

Her head snapped toward his direction. Mother? Of course she had a mother -- a family, even -- only she had no recollection of them. So why did her body fill with warmth at the mention of her mother by a man she hadn't seen before, but was hauntingly familiar? She pursed her lips, torn by conflicting emotions.

"Caroline and Darius can't keep this up. Now get dressed or I'll dress you myself."

"You'll find me an unwilling subject."

He drew in a deep breath and raked a hand through his thick ebony hair. "You are exasperating."

Take a bite out of the paranormal
By: Stephanie Burkhart

Creativity. Imagination. Fascination. These are some of my favorite bites out of the paranormal apple.

"Paranormal" is such a broad descriptive word it affords the writer to explore without limitation or inhibitions.

The best bites of the apple include having a little fun, expanding my creativity, drawing on my imagination, and allowing me, the writer, to set the rules/limits on my paranormal world. I get to explore with the curiosity of a child or the simmering aggressiveness of a lion.

As a writer, you define your world. Do you want werewolves? Vampires? Witches? Shape shifters? What are their abilities? Their limitations? For me, I want to know what makes my supernatural characters human.

You also define the rules. What's good? Bad? You define heroism and villainy. You establish what a character can get away with and what they can't.

Imagination allows for humor and it's important to let your characters have some fun. What makes a paranormal story work is the ability to tap into human emotions despite the supernatural power the character wields.

That thought is at the heart of a paranormal story – human emotion. Without laughter or love, sadness or happiness, anger or tenderness, a reader can't connect with characters.

After all, it's about the characters and the journey that they take to become a better person, which allows a writer's creativity and imagination to expand. Take a bite and enjoy the flavor.

Author Bio: Stephanie Burkhart is a 911 dispatcher for LAPD.  She was born and raised in Manchester, New Hampshire.  After serving 11 years in the US Army she currently calls Castaic, California her home. Stephanie was married in Denmark in 1991 and has two young sons. She adores chocolate, is addicted to coffee and enjoys early morning walks.  She's also an assistant den leader for her son's Cub Scout den and is a Boy Scout mom. She writes paranormal, contemporary, and steampunk romance and has two children's books published with 4RV Publishing.

FIND ME ON THE WEB AT: