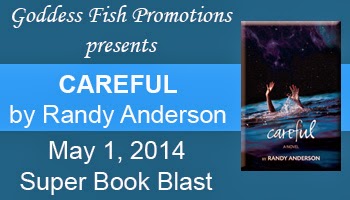 Randy will be awarding an eCopy of Careful and a $25 Starbucks GC to a randomly drawn commenter during the tour.

For two decades Tyler Gibbons has been keeping a secret from his family. At the tender age of sixteen, Tyler embarks on a student exchange program. Sent to the Andean city of Ambato, Ecuador, he finds daily adventure as he tries to fit in at school, connect with his host family, and navigate through a world of beaches, volcanoes, and jungles. But tucked deep inside this year are events so profound, so unexpected, they forever shape the man he will become.
Now, 25 years later, his mother pulls these soaring tales from her son, exposing, for the first time, the source of a deep unhappiness. While these memories contain the wounds of an unresolved past, they also possess the power to heal his painful present.
Thoughtfully crafted and boldly told, Tyler’s journey takes the reader on a wild South American adventure, while illuminating a mother’s unyielding power to heal her child.

The terminal was absolute chaos. Luggage was brought in from the plane on carts, and people crowded around them, pushing and shoving to get a look. Suitcases were tossed aside in search of others and people were shouting. The decibel level became unbearable.

I managed to collect my bags without having to push anyone and headed to Immigration, where men in uniforms opened and rifled through all of my belongings. The officers would occasionally ask me a question, but I didn’t understand what they were saying, so I just smiled, nodded my head, and said sí. They could have been asking me if I had a dead body in my luggage, and I’d have said yes.

When the invasive suitcase search was complete, I walked to passport control. Reaching under my shirt, I pulled out my money belt, unzipped it, and found my passport. I was trembling. Both from the excitement of the moment and fear that I’d exposed my secret hiding spot.

Bam! His stamp came down hard on a randomly selected page in the book. He closed my passport, slapped a flat hand on top, and slid it toward me.

I grabbed it from the table and quickly opened it up to admire my proof. The image was smeared and the ink had bled onto the facing page, but it was legible. Not that I could read it, because it was in Spanish. But it was legible. I held it open to dry as I followed the line of people exiting the terminal.

Randy Anderson is a novelist and playwright. His first book was published in 2011. On Making Off recounted his adventures running The Beggars Group, a downtown theater company that produced over two dozen productions at the turn of the millennium. He is also the author of several plays including; Kill the President, The Dwelling, and Yippie! Randy currently lives in Brooklyn where he writes, reasons, and reacts. You can contact him at www.onmakingoff.com, or on twitter @onmakingoff.