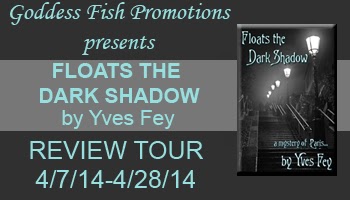 Floats the Dark Shadow is the winner of four Indie awards in both mystery and historical categories.
Young American painter Theodora Faraday struggles to become an artist in Belle Époque Paris. She’s tasted the champagne of success, illustrating poems for the Revenants, a group of poets led by her adored cousin, Averill. When children she knows vanish mysteriously, Theo confronts Inspecteur Michel Devaux who suspects the Revenants are involved. Theo refuses to believe the killer could be a friend—could be the man she loves. Classic detection and occult revelation lead Michel and Theo through the dark underbelly of Paris, from catacombs to asylums, to the obscene ritual of a Black Mass. Following the maze of clues they discover the murderer believes he is the reincarnation of the most evil serial killer in the history of France—Gilles de Rais. Once Joan of Arc’s lieutenant, after her death he plunged into an orgy of evil. The Church burned him at the stake for heresy, sorcery, and the depraved murder of hundreds of peasant children. Whether deranged mind or demonic passion incite him, the killer must be found before he strikes again.

If I'm gonna talk honestly I wasn't expect  nothing for this book. I totally have no idea how did I started to reading this book but I did.. Last week I lost my grandma and I have to go her village immediately with my family. Yesterday I came back to my home. And I started to read my emails and opened my mails.Anyways lets started to disscuss the book.

Like I said I wasn't expect anything. Because it was a kind of new genre to me.  I usually don't read Horror with Mystery or Historical or both but I read. I think I like it. I like it when you came to Paris to become an Artist. But there something going on and you twisted to Sherlock Holmes right away.. The End was surprised me but  it's fitting the story. Also in the same time I'm sad that Averill not happy. I wished him happy :/

All Art,sacrifices,mystery and others made me realized different things. Yves Fey did a great job on this book. I'm glad to reading this one.

Theo studied Inspecteur Devaux again. The quiet he had put on like a mask was intriguing, even a little sinister. How could you capture those layers in a portrait? First, she had seen a hunter, prowling. Next he was the public official, respectful, but expecting respect as well. The tension, the intentness, were well hidden, but there. He had an interesting face, wedge-shaped with high cheekbones. A strong nose and chin framed refined lips. His ash brown hair revealed chestnut when the sun touched it. Under straight brows, cool grey eyes were tinted with warm green. He was handsome in a severe way. She wondered what he looked like when he smiled.

He was regarding her just as directly now, and she felt like squirming. The artist in her was always studying people too closely. Curious to think how similar, yet how different, it must be to look at the world through a detective’s eyes.

“I have an errand—chocolate éclairs.” She smiled, apologetic, flustered. “There’s really nothing more I can tell you. If I don’t hurry, the bakery will close.”

“Merci beaucoup, Mlle. Faraday,” he said, then resumed his exploration of the passage.

Yves has an MFA in Creative Writing from the University of Oregon, and a BA in Pictorial Arts from UCLA. She has read, written, and created art from childhood. A chocolate connoisseur, she's won prizes for her desserts. Her current fascination is creating perfumes inspired by her characters and by Paris. She's traveled to many countries in Europe and lived for two years in Indonesia. She currently lives in the San Francisco area with her husband Richard and three cats, Marlowe the Investigator, and the Flying Bronte Sisters.