Special Interview with a New Star! Khai L. Bayne And her First Book, Indebted: A Sin From Ashes

Don't Forget to check out the Teasers from her books!
❑ Hi Khai we want to know you. Can you tell us somethings about you? 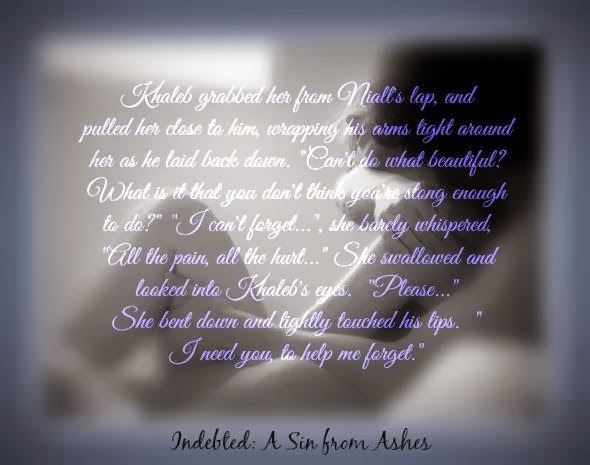 -Hello Lovely! (Flails Muppet Arms, Fan Girl Squeals, and does the "Happy Fat Girl" dance...Clears Throat)
Okay, Well you already know my name is Khai... so, let's get to the fun stuff!
1. I'm in my early 30's
2. I put hot sauce on popcorn (it's pure awesomeness, if you haven't tried it you should!)
3. I have a very healthy obsession with Gay Porn, my favorite porn star is Dolf Dietrich, Ooooo hunty! (Fans herself)When that man growls... my good girl clenches!
4. I have conversations with my characters everyday (whether I want to talk to them or NOT... sometimes we don't always see eye to eye.)
5. Because I am in so many private groups that are full of awesome pervs like myself and we promote foolishness and other forms of Awesome Debauchery, Checking my Facebook in a public setting is guaranteed to elicit one of the following actions:
- a gasp of "OMG"(insert imaginary pearl clutch and Look of disgust.)
- a giggle, and start of awkward conversation which I'm NOT really interested in. (had this happen from BOTH men and women)
- a full out laugh and a "Nice" with a smirk of solidarity (Only had this happen once and it was by far Best. Reaction, EVER.)


❑ I should look at Dolf LOL! So, Indebted: A Sin from Ashes is the name of your book. Why did you came up with this name?


-I actually had 2 titles I was flip flopping back and forth between, because the story is based off of a debt my heroine owes. One day I was talking to my editor and running the two ideas by her...
I was typing it out and got distracted by something (probably by a picture of a naked man with a big penis, which is a very high likelihood) and instead of typing out the 2 separate titles, I typed them out as Indebted: A Sin from Ashes... and Violá, my baby had a name.

❑ You are an author. I'm assuming that you're reading books. How much you could read in a year?

-Well this year I've been slacking horribly (I've only read 12 I believe so far), but last year between Novels, Novellas, and short stories I think I may have read over 1100+ (what can I say I love to read.) 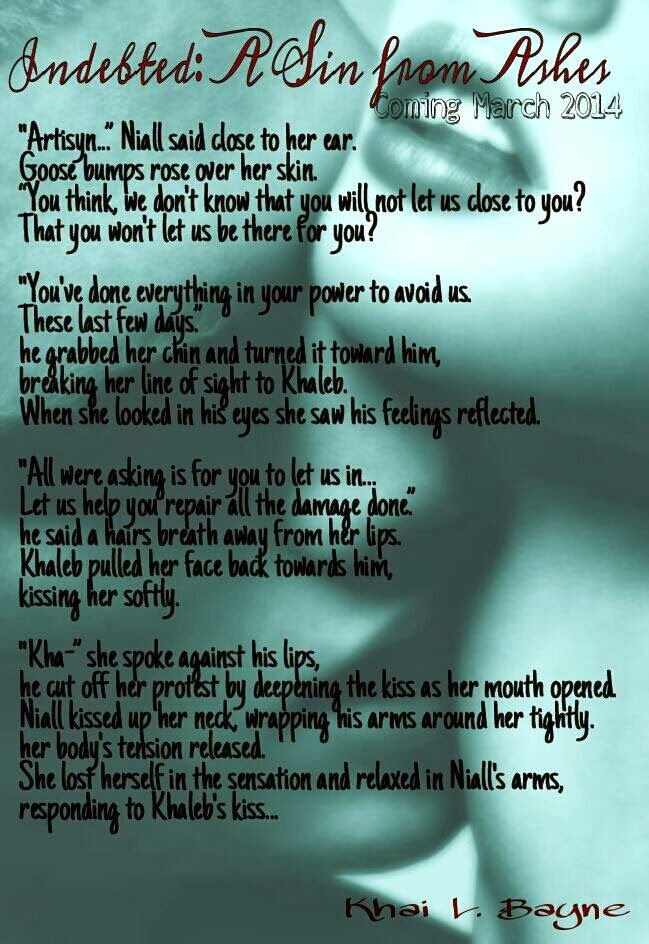 ❑ That's a  huge number! So,what's your expectation about an author?

-An author should always be engaging and nice to his/her Fan base. Creative, open minded, and have the ability to "reinvent" themselves and their Work. Even if the story outline follows the same path as others, or even an authors previous Work, they should still have the ability to make the reader say "wow, I knew some shit was Coming, but I never expected THAT!"

❑ Are you hanging out in any social media? Which ones you're using mostly?

-I have run the gamut with the whole social media phenomenon. I mainly stay with what I know:
Facebook, which I use everyday
Twitter, which I use only on occasion
Tumblr, which I only use to find "naked inspiration"

-Hmmm, man all the books I've read it's hard to choose just one favorite! I absolutely ♥ Kendall Gray, Harper Sloan, C.d. Reiss, Red Phoenix, and Chelle Bliss, and there are also a few Authors that aren't as well known that I adore as well like Azure Boone, Brad Vance, and Tamsyn Bester.
-I'm not going to mention what books or Authors I thought were the worst.
A.-Because I wouldn't want someone to put me out there like that.
B.- Because quite frankly, you have to have a big set of balls to want to venture on this journey, and they have to be made of granite for you to follow through and hit "publish". Yes, some are better at it than others, but in the end we are all, just trying to live out our dreams.


❑ I'm writing stories on my own since I was a child. Can you give advice like me and other eager's?

-Just take your time developing it. You may want to rush though and get it done, but that's NOT going to help you release your best Work.
Do your research, whatever genre it is you choose to write in make sure that it's based on facts, then embellish from there.
Make sure you have an AWESOME support system (read: someone who can handle your neurotic episodes that are bound to happen.) 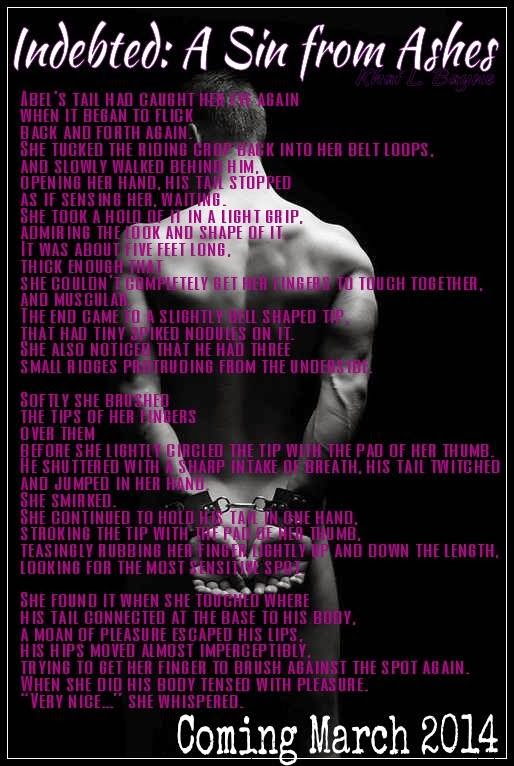 ❑ Do you have/had an another job besides being an author?

-Yes, I Work part time for a nightlife promotions team for the city I live in, and I'll be starting a second job at the end of the month...
It is definitely going to be an exercise in time management.


❑ Your family and friends what are they talking about you,being an author?

-My family is actually happy and supportive of the fact that I'm writing a book (I'm sure I'll get some "Pearl clutching" in response after they've read it. Meh! They know my depravity rabbit hole runs deep!), my mother is definitely my bigger supporter on the family front, she calls or text me everyday and gives me encouragement.

❑ It was so lovely to talking with you. Is there a something you want to add?

-Yes! Indebted: A Sin from Ashes, comes out March 30th! And I would ♥ you all so hard if you'd would support me and get it!
Gönderen Unknown time: Friday, February 14, 2014