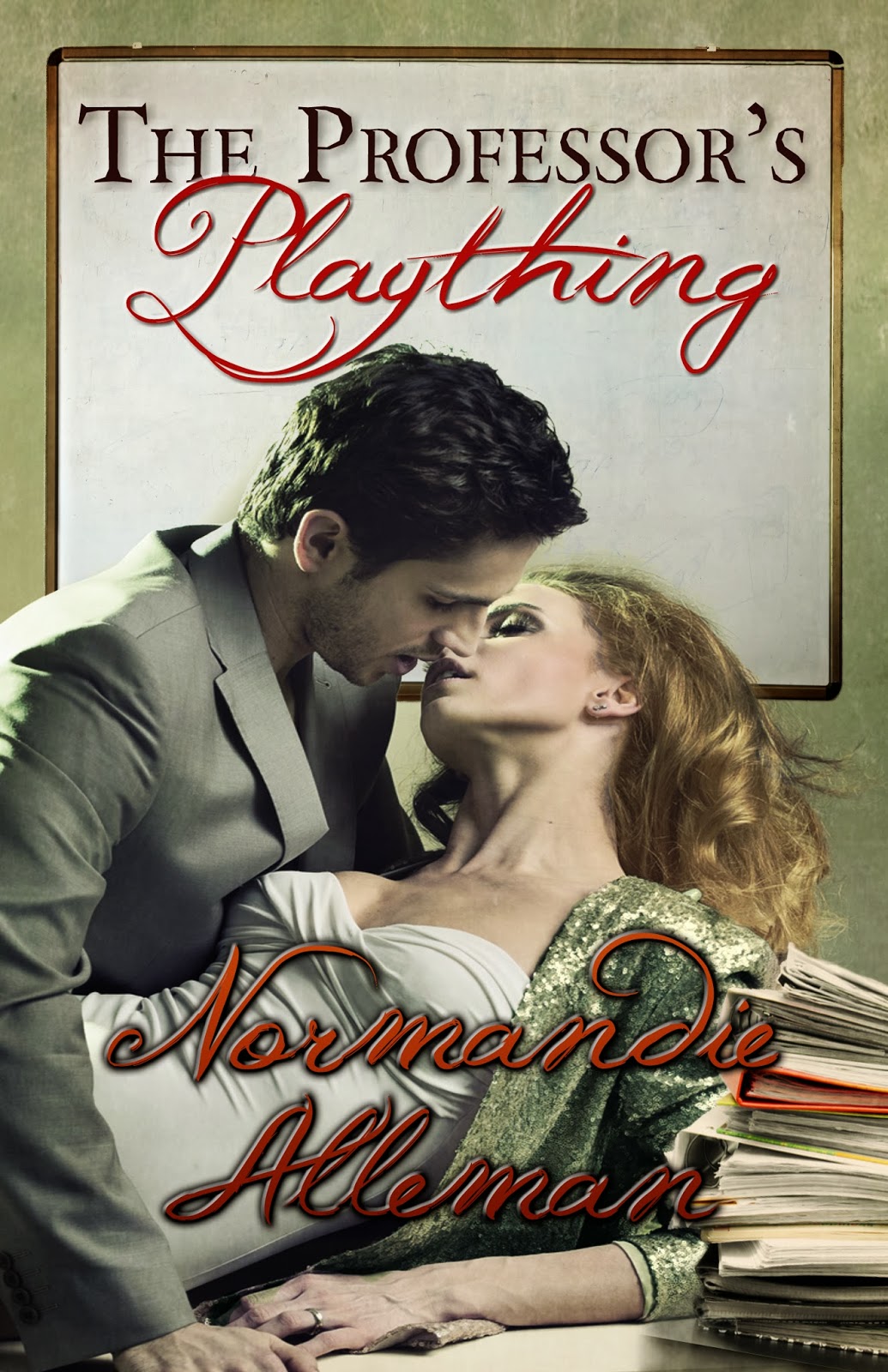 She’ll loosen him up, and he’ll tie her down.
Twenty-one year old Colette Ellis has done plenty of daydreaming about Professor John McGill, but after a spur-of-the-moment decision to seduce him in his office turns her fantasies into reality, she is left longing for more.She soon learns that this handsome academic can be as firm as he is passionate, and when her bratty behavior earns her a sound spanking she sees a side of him she never expected. Before she knows it, the beautiful young woman finds herself tied up at his mercy, naked, exposed, and more aroused than she could have ever imagined. As she grows closer to him, she cannot help but wonder how long this can last. Could John come to see her as more than just a naughty coed?John has never fallen for a student… until now. There is something different about Colette, something that brings him alive in a way he has never felt before. Can he dare to hope that she is  after more than just a fling?

Everyone knows that I love Teacher&Student Affairs. And I love this one too. I love men when they blushed or when they are nice. John was the one of them.He's such a nice man.I'm not much a fan of BDSM books and I wished beeing haven't. Storyline going good to somewhere...until she said handcuffs... I didn't like the main woman. She is just... I hate that kind of people. And seems John was too easy to trick. I hated John didn't resist. I guess I wanted to find some difficulties because both side was too easy. Anyways,for a short book it was good.

Colette frowned. Things were not going the way she’d hoped. She needed some serious research experience, and she hoped to obtain a glowing recommendation from Professor McGill. She really wished someone had told her about all this before she spent the first three years of college funneling beer and hanging out with frat boys. She was in a mess.

If Professor McGill wasn’t going to be able to help her, she had no idea what she could do. All her options had disappeared, and she felt as if the walls were closing in on her. Tears began to well up in her eyes.

The professor peered over his glasses at her. “Is there anything else?”

He seemed so eager to get rid of her as he sat there in his button-down shirt, all serious and mature. Much more mature than any of the boys she’d dated. This man operated on a different wave length than the party boys she knew.

The combination of his blunt rejection of both her presence and her offer to do more research sent her unshed tears spilling down her cheeks.

When he saw she was crying, he searched the room for some tissues. Retrieving some from a table in the center of the room, he handed her the box.

She dabbed her eyes and sniffled. “Thanks, that’s sweet of you. I’m okay. Sorry about that.”

“What’s the matter?” he looked both concerned and horrified, like he’d never had a crying girl in his office before, and he had no idea what to do.

“I’m just having a difficult time. I’ve been rejected by all the grad schools I’ve applied to, and I guess the pressure is getting to me.”

“Why don’t you sit down?” He gestured to a couch that was covered with books and papers. Seeing there wasn’t room for anyone to sit there, he started moving the books and papers to the table where the tissues had been. “Sorry about the mess.”

“That’s okay,” she said sitting down. She understood. Her bedroom was a disaster area.

He sat beside her. “I wish I had more work on the research project for you, but we won’t be moving onto the next phase until fall, and I already have the people in place I need.”

She nodded, suddenly aware that his thigh was centimeters from touching hers. His biceps bulged against the fabric of his shirt, and she wondered how she could have missed noticing how muscular he was when she’d been in his class. Maybe he’d started working out since then.

He continued to talk about his research, but she was distracted by how hot he looked with those studious glasses and his sexy Van Dyke beard. When she had been a student in his class, Colette had daydreamed about Professor McGill all through class and whenever she passed him in the hallways. She’d wondered what it would be like to kiss him and to feel his beard tickle her chin.
Then something inside her snapped. All the desperation, all the rejections, all the uncertainty she faced came crashing down on her, and as she watched his delicious lips move while he talked, she recognized an opportunity.

Feeling like she had nothing to lose, she leaned over and pressed her lips to his.

He grabbed her upper arms, and she thought he was going to push her away. Instead, he responded to her kiss.

Forwardly, her tongue darted between his lips, and he began to explore her mouth, a short groan springing forth from his throat.

Emboldened by his reaction to her advances, Colette placed a hand on top of his thigh, her heart beating faster in her chest. She allowed her hand to travel up his leg and rest on his crotch. The bulge in his pants was clear evidence that he found her attractive.

Colette slid onto the floor, positioning herself between his knees. Her blue eyes met his green ones. “I really appreciate you letting me work on your project,” she fawned, deciding if she kept talking, perhaps he wouldn’t send her away. Easier to talk about his blasted research project than what was happening between them. “You really have been helpful.”

“I’m glad,” he choked out looking a bit dazed.

Butterflies fluttered in her stomach. What if he pulled away? Or worse, what if he kicked her out of his office? Reported her to the dean?
Remembering that he’d kissed her back, Colette summoned all her courage before reaching up and tugging at the zipper on his pants.

Author Bio
A former psychologist, Normandie has always been fascinated by human behavior. She loves writing quirky characters that are all too human. “I’m interested in the kind of relationships people have in real life. So I write about my characters’ messy, unpredictable, and inexplicable journeys to love.”
If there were another 5 hours in the day, Normandie would spend more time needle-pointing and playing with photography. Instead, she’s a Pinterest and Twitter addict who loves sports and the color pink. She lives on a farm with her husband, a passel of children, and a pet pig who’s crazy for red bull.
Twitter at @NormandieA | Pinterest | Facebook | Website