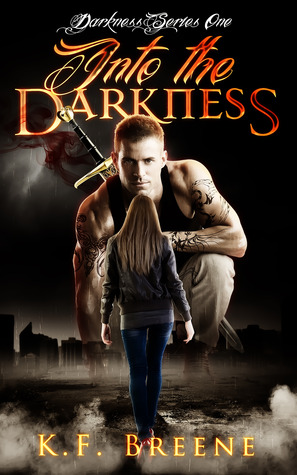 I’d always been different. I saw objects in the night where others saw emptiness. Large, human shaped shadows, fierce yet beautiful, melting into the darkness. I collected secrets like other women collected bells; afraid to fully trust lest my oddities be exposed.

Until I saw him. He’d been gliding down the street, unshakable confidence in every step. It wasn’t just that he was breathtakingly handsome with perfect features. Something about him drew me. Sucked my focus to him and then tugged at my body. As his eyes met mine, I was entrapped.

No one had noticed him. He’d been right there, just beyond the light, but only I had perceived....


I had to know if he was real. Or maybe I really was crazy. And even when my secret box was blasted wide open, dangers hurled at me like throwing knives, I couldn’t stop until I unraveled his true identity.

I just had to know.

“She was fated to live.”
“Then why must you save her?”
“Often Fate is struck down by dumb luck.”

Into the Darkness is currently FREE on Amazon, along with these other books by K.F. Breene!

As I met his black eyes, his puzzled expression deepened. “You’re human…”
“We established that, yes. What I want to know is, if I am human, what does that make you? And why do I notice you when others usually don’t?”
His head cocked to the side. His easy balance, his lethal edge; he was like a blade resting on billowing silk. “Very few humans are able to withstand our pheromones. Fewer still to break a Kolma once it has been placed. You’ve not been trained, that’s obvious; so how is this possible when you’re definitely human? Do you possess the blood of another species?”
I could barely think past the pounding ache of my body, begging to touch him. I needed to get a grip! He was revealing some very interesting factoids I needed to jot down in my mental notebook.
His nostrils flared. “Charles was right; your arousal is a unique scent. Like a spicy, warm drink on a mid-winter’s night. It rises above other smells, entrancing the mind.”
“Umm,” charged with questions, determination, anger, and demands, I thrust forward, “Listen, what did you mean about withstanding the…pher-thing? Or breaking the other thing? How can you trap someone’s head with pleasure? Because I’m pretty sure—not positive, but pretty sure—that Jared is straight. And also, I really think we should circle back to what the hell you are, and why nobody knows that you exist? Because this whole people scattering thing is not normal, and I think an explanation is probably in order.”
He stepped closer, not hearing me, or not caring that I spoke. His eyes looked at me like I was a life-sized riddle. They delved, searching. He took another step, forcing me to retreat two steps to keep distance between our bodies. Another step back had my back to the wall.
A small smile curved his lips. “I exude pleasure, you run. I exude fear, you come calling. You want me, I can smell it. I can feel it, almost like a palpable thing. Give in to it. Yield to me.”
Oh God I wanted to. His body was mere inches from mine, his intense eyes looking down into my soul from a face out of a Renaissance painting. The power of him, the sheer strength, had strange, primal fantasies running amok through my head. My core tingled, my chest surged, and my nipples were so hard they could cut this stone wall.
Why had I come here, again?

A wine country native, K.F. Breene moved to San Francisco for college just shy of a decade ago to pursue a lifelong interest in film. As she settled into the vibrant city, it quickly became apparent that, while she thought making and editing films was great fun, she lacked cinematic genius. For that reason, her career path quickly changed direction. Her next goal was a strange childhood interest, conjured at the dining room table while filling out a form. For some reason, her young self wanted to be an accountant. Thinking on it now, she often wonders how she had any friends. Regardless, it was the direction she finally took.

While she could wrangle numbers with the best of 'em, and even though she wore the crown as the most outspoken, belligerent accountant in the world, her mind got as stuffy as her daily routine. It was here that she dusted off her creative hat and began writing. Now she makes movies in her head, not worried about lighting, shutter speed or editing equipment. Turns out, a computer is much easier to manage than a crowd of actors. She should know, she was an actor at one time.