Dangerously Hers by A.M. Griffin 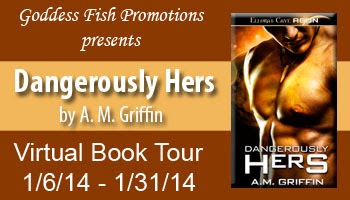 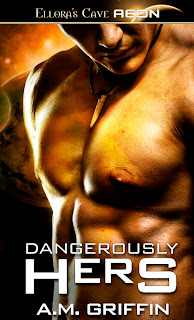 Loving Dangerously, Book Three Jess hates aliens. After the invasion that destroyed Earth, the extraterrestrial bastards sold her to a brothel as a sex slave. She may have escaped but the old memories and fears still linger in the dark corners of her mind. Supposedly Sonis is just the place for her—somewhere safe, where she can heal and start fresh. She’s almost hopeful…until she meets Rasha, her new boss.

Rasha, Captain of the Sonis Royal Guard, is a warrior through and through. He’s huge, sinfully sexy and could have any woman on Sonis—but the woman he wants is Jess. He’s very much an alien and Jess knows she should hate him or at least be wary, but whenever he’s around, she loses control. She tells herself it’s only sex—amazing, mind-blowing sex like nothing else she’s ever experienced—but there’s something about Rasha that shakes her soul. The feel of his skin against hers, the look in his eyes as he touches her—they make her want to believe it’s possible to find love and begin again.

OMG! This book hot as hell! Even though I didn't read sequel ones but I think this can be read stand alone.Of curse in some point I didn't understand somethings like Sonis but I ignored that I didn't know Sonic.

He inhaled sharply. “I can smell you.” Then he let his gaze drop to crotch.


Her hands instinctively dropped to shield herself.


She gasped as he dropped to his knees. “What are you doing?”


He wrapped his arms around her and cradled her ass. Her mouth dropped open as he nuzzled his nose between her thighs. “I can take care of this…you.”


She dug her nails into his shoulder blades. Should she push him away or keep him where he was?


He made a sound so animalistic. So hot and sexy that it made her pussy respond in ways she didn’t want it to.


His fingers worked in unison to massage her ass, all the while pulling her onto his face. She tried to stand her ground even when she rocked to her toes.


He looked up to her with eyes smoldering with heat. “Can I do it Jess?”


She blinked, trying to remember his question. “Do…do what?”


“I want to taste you. I want to bury my face in your pussy. I want to…to…” Growling, he bit her.

A. M. Griffin is a wife who rarely cooks, mother of three, dog owner (and sometimes dog owned), a daughter, sister, aunt and friend. She’s a hard worker whose two favorite outlets are reading and writing. She enjoys reading everything from mystery novels to historical romances and of course fantasy romance. She is a believer in the unbelievable, open to all possibilities from mermaids in our oceans and seas, angels in the skies and intelligent life forms in distant galaxies.


Join me on Triberr! http://triberr.com/AMGriffin