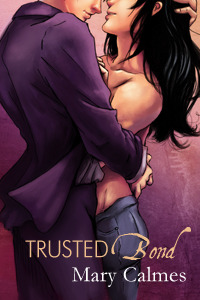 BLURB:
Jin Rayne is having trouble adjusting to the new life he’s supposed to love. Instead of adapting to being the mate of tribe leader Logan Church, Jin can't get past the fact that his lover was straight before they met. He's discovered the joy in belonging to Logan but fears his new life could disappear at a moment’s notice, despite Logan's insistence that they are forever, end of story.

Jin wants to trust Logan, but that desire will be put to the test both by a rival tribe leader and by a startling revelation about Jin's existence. At stake is Jin's life and his place in the tribe. If he's going to survive to see Logan again, he'll have to release his fear and freely accept the bond, for only then can he truly trust.

Wow, this book blows change of heart out of the water. The world she...
builds and the characters are so rich and interesting. The writing in this book seems so much more polished and the characters more I guess, mature, for lack of a better word than in Change of Heart. Besides more of Jin and Logan I find myself hoping for books on Korin and Domin, Crane, Justin - geez she could write a lot of sequels to this series and I hope she does.I loved this novel as much as the first book. It has not just continued elements of world building, but a captivating and quite tense plotline. Both Jin and Logan go through hell, and quite a bit of (much needed) growth and there are enough loose ends to make me hope for a further installment. What more could I want?

Where much of the world building in book 1 was around the rules within a werepanther tribe and how a semel (leader) and his reah (true mate) should live together, most of the revelations in this book were around the larger werepanther society and its history. The same gradual reveal that fascinated me so much in the first book was used here and I loved the additional pieces of Ancient Egyptian mythology added here.

Jin is a very strong man, but he is a bit slow in some respects. He annoyed me a little in the beginning, but then, his situation is so unique and different, that his lack of 'perfect adaptation to his new life' should not have been a surprise. And he makes up for it in bunches with the way he grows and deals with all the new obstacles thrown at him.

Logan continues to be a little less approachable, mainly because we never 'hear' from him so to speak (the story is still told entirely from Jin's point of view). But we do have his actions to judge him by, and those are unequivocally supportive and very loving.

If you liked the first book, you will love this second one as much as I did. If you're curious about a truly different shifter society and are looking for some fascinating mythology to go with it, go for it (but I do recommend you read book 1 first). And if you like stories with hot men and hotter sex, this one is a no-brainer.

Mary Calmes lives in Lexington, Kentucky, with her husband and two children and loves all the seasons except summer. She graduated from the University of the Pacific in Stockton, California, with a bachelor's degree in English literature. Due to the fact that it is English lit and not English grammar, do not ask her to point out a clause for you, as it will so not happen. She loves writing, becoming immersed in the process, and falling into the work. She can even tell you what her characters smell like. She loves buying books and going to conventions to meet her fans.