Beneath Manhattan Skies by Emma Meade 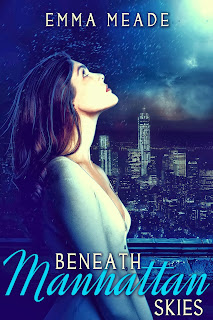 November in New York is cold but full of possibility for college freshman Erin Harris. When her twin brother, Nick, shows up on her doorstep for a surprise visit, Erin is delighted. Unfortunately, Nick’s arrival coincides with the discovery of a body outside her apartment building, a body drained of blood. Right away, Nick assumes vampires are involved. He’s not exactly their biggest fan since Erin dated one in high school.

Juggling nosy roommates, a first date with a gorgeous guy from college and a brother on a Van Helsing kick is enough to keep any nineteen year old girl busy - And then Erin’s old flame walks back into her life.

Is Erin destined to be caught up in supernatural shenanigans, or will she choose a different path?

*Beneath Manhattan Skies is a standalone story, following the character Erin Harris from Under the Desert Moon.

I really liked this book and it felt a lot like a thowback to you know the mysterious vampire ones. Like L.J Smith,Buffy or  I dunno like that. I read a review that this is actually a sequel, I got a little scared. Because you know I thought I'll be confused.But I think this can be read stand-alone.
Beneath Manhattan Skies by Emma Meade is a refreshing,funny also mysterious.I was fun with between characters dialogue.If you are looking for a light and easy paranormal romance, then this is the book for you. For me, it read quickly.Also I love the cover.

Nick and Erin kept a lookout for anyone of the supernatural persuasion, a difficult task since Erin doubted vampires went clubbing with the words I want your blood printed on their shirts. What had James and his maker in common? Agility, gracefulness, a predatory sway. It should be simple to spot one. Yeah right!
They had zero proof the vampire or vampires responsible for both deaths even frequented the place, if it’s even vampires, she reminded herself. But if the cops were interested in the club, then it was the only lead Erin and Nick had.
“If we do see a vampire, what next?” Erin asked.
“We follow him.”
“And then what? Ask if they'd like a bloody beverage? A diet Coke with a splash of O Negative?
“We kill them.”
“Oh, of course. Because we both know how easy that is … And how exactly do we do it, oh intelligent one?” Erin spoke as low as she could over the tuneless house music. “Do you have a stake handy?”
“Yes.”
“What? Are you crazy?”
Nick unzipped his coat and pointed at his inside pocket. Erin checked to see if anyone was looking before she did a quick search. Something long, wooden and narrow. A stick.
What the hell?
“I made it a while back. Just in case.”
“Just in case,” Erin parroted. “Just what exactly have you been up to in Boston?”
“Relax.”
“Oh, I'm sorry, Mr. Van Helsing, but I wasn't aware my brother had become a vampire hunter.”
“Can we talk about this later?”
“You talk about it later. I'm going to the bar.”
Before Nick could protest, Erin stormed off. She hadn't known Nick to keep a secret from her, ever. But not only had he been carrying out research of the supernatural persuasion behind her back, here he was walking around with a homemade stake in his pocket, hell bent on some stupid vampire hunting mission.
Erin berated herself for coming to the club. If she and Nick came up against a vampire, the odds were not in their favor. Once again, the question came unbidden. Where are you, James?

Emma Meade lives in Ireland where it rains a lot. Reading and writing supernatural fiction, watching marathon re-runs of Buffy and drinking lots and lots of tea are some of her favourite activities. She’s never met a vampire, but thinks it would be kind of cool to meet one. Visit her on her blog, Emma’s Ramblings on Supernatural fiction at emmameade.com or on her website emmameadebooks.com