The Sex Doctor by Jessica Frost 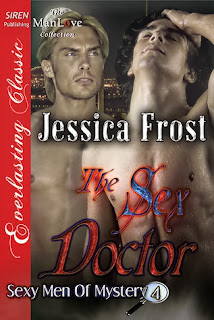 Low sex drive? The Sex Doctor can cure that!

Detective Marshall Ray’s hoping the Sex Doctor, Dr. Sébastein Thibeault, can cure him of his low libido. When he meets the handsome, charismatic hunk, he’s flustered and can’t stop thinking about him. But to partake in the doctor’s unconventional therapy, he has to open his heart, which scares the hell out of Marshall.


The reason Sébastien’s therapy’s so successful is he’s an empathic vampire. He uses his sixth sense to cure people. With Marshall, who makes his heart pitter-patter, his senses tell him the cure for Marshall is him. The sexual attraction they have is something Sébastien cannot dismiss. But something’s happening to Sébastien that frightens him. He’s having blackouts and waking up with bloodstains on his clothes that aren’t his.


People are being mysteriously killed in the city, their bodies bled dry. Marshall tries to figure out who the murderer is when a witness identifies Sébastien as the killer. Marshall must secretly investigate Sébastien while trying not to let his emotions affect his job. Easier said than done when his heart’s telling him Sébastien’s his soul mate.


REVİEW:
First I want to say this books so good! Jessica did awesome job on this book. I.Love.it. Also I saw last night there a 5. book? OMG! I WANT IT!
She's such a good writer.

Marshall has a problem in his libido.Some of his friend recommend a doctor for him.
Sebastien is a vampire.But not like others.He is a doctor.Also he found cure about blood needed.
There's a killer out there.Killer is killing humans and drank their blood until last drop.
And there's a lies in the middle of their relationship.
Sebastien called The Sex Doctor. First he healhis costumer and then you pay him for his job.
When they see eacher other for te first time Their heart start racing and never stop beating faster when they see each other.
Although they didn't realize but they fall in love each other that time.
Sebastien has a problem too. Actually 2.First he hasn't found his mate second he has a blackout. With Marshall he can cure himself.He need Marshall just like Marshall need him. Just like two birds with one stone.

You can find this questions answer in the book.