Reflection of the Gods by Lisa Llamrei 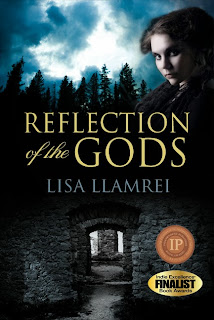 Newly divorced Das MacDermott longs for a fresh start. As he packs up and prepares to move out of the city, he spots a young woman being held at gunpoint by three men. Despite being outnumbered and unarmed, Das does his best to
intervene. Once liberated, the victim seems oddly ungrateful, but on an apparent whim decides to join Das in his new life in rural Ontario. Aislinn, as she is called, returns the favour; with her encouragement and support, his start-up photography business takes off, and more importantly, Das is saved from loneliness and self-doubt.

Das, however, is never quite able to fully dismiss the contrary aspects of Aislinn’s nature, and is strictly forbidden from asking about Aislinn’s past. All seems too good to be true, and indeed it is. Aislinn’s unusual talents and odd Behaviour, unbeknownst to Das, come from her demigod status. Aislinn is half-Sidhe, daughter of Fionvarra, Ireland’s fairy king, and a human woman. Sidhe wars have so disrupted the mortal world that Aislinn has joined with other immortals in an effort to permanently separate it from Tir N’a Nog, the fairy realm.

Born in ancient Ireland, Aislinn spends millennia as the plaything of the cruel and narcissistic gods. The pain of being neither human nor Sidhe is offset by her relationship to the Fir Bolg, another race of fair folk who take pity on her lonely state; and the refuge she takes in being Das’s lover and protector. As Das comes to accept the possibility that Aislinn belongs to a supernatural world, he discovers that the two worlds are set to collide in a way that may mean the destruction of all humanity.

Review:
Ancient time to 21st century, it's an interesting concept and it feels like time travel.
Das is a recent divorcee who is moving from a larger city in Canada to a small town. On his way out of town, he acts against his better judgment to attempt to save a damsel in distress, Aislinn. But she's no damsel. She's an immortal.

Just when I thought it would be told totally from Das' point of view, it switches to Aislinn's. The two take turns, with Aislinn choosing to tell her tale a bit out of order, but it makes sense because she's immortal and has little concept of time. She tells things as she wants and she has a long history. Half mortal, half Sidhe, she's an outcast of all worlds. She has the powers of the Sidhe, who were once gods, and the sentiments of a human. She makes many mistakes in her lifetime, which she owns up to. I like that about her.

Reflection of the Gods opens with a brief chapter of Das's childhood which results in unforgettable repercussion. Sparks fly between Das and Aislinn and I find the development between them a little too fast-paced.One way or another I like it. It was so different for me.

Reviewed on Amazon and Goodreads.

A scant three weeks later, I was led to the cathedral. The stone façade reached higher than the trees in the forest. It towered above all the other buildings in town, save the castle itself. On the south side of the transept rose one of those round, stone towers of which the native Irish were so fond. It was even taller than the cathedral itself. For as long as possible, I kept my eyes on that tower to distract myself from my purpose, shielding my eyes from the brilliance of the sun.
Inside, the air was heavy with the smell of many bodies. The whole town had turned out for this event. I passed through the nave toward the altar. Light filtered down from the clerestory, illuminating a storm of dust motes.
I could see them darting in and out of my peripheral vision. They had never really left, no matter that I continued to ignore their presence, but on this day they simply refused to go unseen.
Kneeling in front of the altar, in the silence before the priest began to speak, I heard them. The sound of hundreds of small voices all speaking at once. I leaned back and glanced surreptitiously over my shoulder. I saw nothing unusual until I returned my gaze to the rood screen behind the altar. A strange man stood behind the priest. I had never seen him before. I looked left and right, but no one else appeared to take any notice of the stranger. He wore rough animal skins of a silvery-grey colour. His limbs were well formed, very muscular, and I felt the heat rising in my face. His hair was also silver, although his face appeared quite young. His hair was tangled and unkempt. I first thought he must be a wild man, but promptly revised this opinion and determined he must be some kin to the wee folk. For, if anyone else in that church had been able to see him, there surely would have been a commotion.
As I studied him, so he studied me. I tingled. I raised my head as much as I dared, no longer hearing the words of the priest. The man smiled at me. I knew him. I could not think how or from where, but I was certain I had met him before. He winked at me.


Lisa Llamrei was born in Toronto. She studied languages at York University. At various times, she has been an actor, professional belly dancer and holistic nutritionist. She presently lives in Durham region with her four daughters, and she works at a school of holistic nutrition. Reflection of the Gods is her first novel.