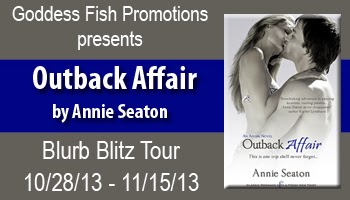 Annie will be awarding $25 Amazon GC and an Aussie Calendar to one randomly drawn commenter during the tour. 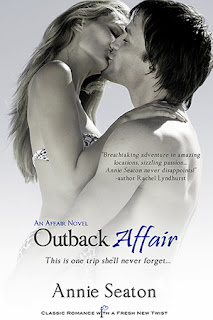 Jessica Trent wants to be a full-time writer for Cuisine magazine, but in order to land the gig she has to snare a one-on-one with the reclusive Alessandro Ricardo, a man hell-bent on staying out of the limelight. The last thing she expects as she heads to Crocodile Springs resort in northern Australia is to end up traveling across the Outback with a rugged and far too sexy barramundi fisherman.

Ex lawyer Alex Richards protects his privacy and his heart in equal measure. So when a Yankee bombshell in need of a ride turns up and threatens both, he decides to teach her a lesson. As they make their way through the wild country together, the attraction between them ignites. Alex must choose between his heart or letting go of his past … and will Jessica understand why he lied once she finds out who he really is?

REVİEW:
Jessica flies out to Australia in hopes of snagging an interview with the elusive and much sought after Alessandro Ricardo. She feels this is her in to Cuisine magazine, kick-starting her career into journalism. She wants to get away from her current job, which she despises, and comes with strings attached to her rich and controlling father. Jess plans to weasel her way into an interview, however she can, keeping the fact that she’s journalist hidden until she corners Alessandro, and accomplishes her mission. She sucks at planning ahead and so she doesn’t realize, because of rough terrain, it’s very hard to get to the resort he is staying at. This is how she ends up at the mercy of Alex Richards an Aussie fisher and Outback expert, trailing through the dangerous Outback with him.

I had high hopes for this story. I loved the idea of this story being set in the Australian Outback, the beauty and danger sounded like a thrilling setting, and it was to a certain extent, but I really thought there would be more danger, and adventure. Yet, that wasn’t my problem.

He kept going on about teaching Jess a lesson in honesty, yet he hides his identity for most of the book!
Other than this, I like the book. Now I'm thinking reading author's other books.

“May I have the check-in form, please?”

She gasped as a large tanned hand whipped past her arm and grabbed her keys. “What the hell do you think you’re doing?” Jess tried to keep her voice level as he dangled the keys rudely in front of her face.

“I’ll move the car for you. Janet here will get you all checked in,” he said. “Which cabin, Janet?” He turned to the woman behind the counter. “I may as well park it for the sweet young lady.”

Jess was at a loss for words. No way did she want this unkempt hulk knowing her room number.

“Last one on the left down by the boat ramp,” Janet called after him as he strode to the door. “And watch out for the crocodile. There’s been a biggie hanging around the ramp all day. The rain might get him wandering.”

“Oh, and by the way.” He paused in the doorway and looked back over one shoulder. “Don’t look at me as though I’ve just crawled out of the slime. The back of your pretty shirt is covered in grease.”

The door slammed shut behind him Jess looked up at the woman behind the counter. “Are all Australian men so…so rude?” 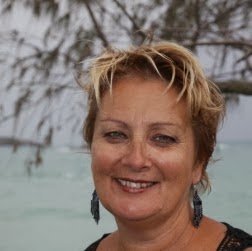 Annie Seaton lives with her husband, and ‘Bob’ the dog and two white cats in a house next to the beach on the east coast of Australia. She sits in her writing chair, gazing at the ocean and writing stories.  Their two children are grown and married and she loves spending time gardening, walking on the beach and spoiling her two grandchildren. She has always been fascinated by all things romantic and has found her niche in life writing romance novels, ranging through contemporary, historical, suspense and paranormal...but all with romance of course.
Her love of reading and history began at an early age and she was a child who always carried a book (or two) no matter what she was doing. Several of her favourite books were confiscated from beneath her desk by teachers who had no understanding of her capacity to read while she was doing her schoolwork!

Her working life has seen her through several major career changes and Annie has now retired from the world of full time work and has fulfilled her lifelong dream of becoming a published author.

Annie’s debut full length novel, Holiday Affair, a contemporary romance set in the South Pacific was released as part of Entangled Publishing’s Indulgence line in March 2012 and has been a best seller on both Amazon, and Barnes and Noble. The sequel Italian Affair was released in June 2013, and will be followed shortly by Outback Affair. Annie has more books being released in 2013 and 2014 with Entangled Publishing in the Bliss, Entangled Ignite and Covet imprints.

Annie loves to hear from readers at: annieseaton26@gmail.com