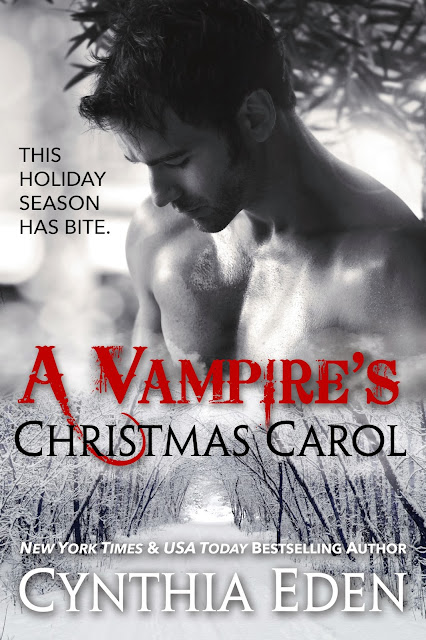 This holiday season has bite.
Ben Prescott hates Christmas—he’s a vampire, and to him, there’s certainly nothing jolly about the holiday season.  While the humans are running around being merry, he’s hunting in the shadows.  Ben plans to spend the holidays his way…by stalking deadly prey.


But fate has other plans for Ben.
Three visitors are coming Ben’s way…A demon who will force  Ben to face his past, a ghost who will show Ben the present he could have, and a shifter  who will reveal the darkness that waits in Ben’s future. Unless Ben can change his ways, he may just turn into a real monster, one who can’t be saved by anyone or anything.

‘Tis the season…to be undead.
Ben’s redemption rests in the hands of the one woman he loved and lost—Simone Laurent.  If Ben is going to have a chance at being more than just the beast in the darkness, he has to prove himself to the lovely Simone.  A very hard task, considering that, once upon a Christmas Eve, Simone died in Ben’s arms…

Warning:
This book features one very tortured vampire, a sexy ghost from his past, and hot scenes designed to melt the winter snow. Plenty of action, adult situations, and steamy times are ahead. Happy holidays!

The fire flared again, and in the next instant, William was right in front of Ben.  The demon was fast. “You should be more grateful. You’re immortal. One of the most powerful vampires I’ve ever come across. But you’re going down a dark and dangerous path, a path you don’t want to take.”
Ben offered him a grim smile. “It’s the only path for me.” Blood and death and demons. Yeah, that all seemed right.
“Once you wanted more.”  William grabbed Ben’s hand. The demon’s touch burned, and smoke rose from Ben’s skin. “You just need to remember that. Remember who you were before.”
Ben twisted his wrist, but, even with his vamp strength, he couldn’t break free from William’s hold.  “Let. Me. Go.” Or he’d be ripping the demon’s head off in the next five seconds.
“I’m the first visitor of the night.”
The first?
“There will be three, and in the end, the choice will be yours.”  William glared at him. “But I’m telling you, asshole, make the right choice.”
Ben flashed his fangs and went for the demon’s throat. He braced himself for the acid burn to come. He’d drunk from a demon before, and he knew that taste would be a real bitch.
Before his fangs could slice into William, flames erupted around them. Surrounded them. And Ben knew he was about to die. His last thought…