Blitz and Giveaway! The Rules of Regret by Megan Squires 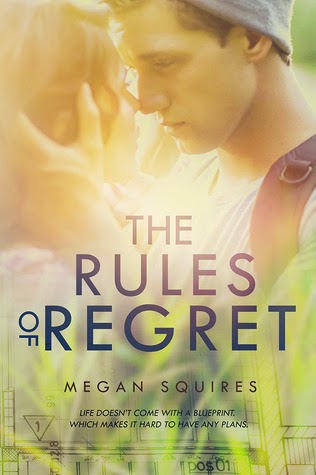 Synopsis:
“Life doesn’t come with a blueprint, which makes it hard to have any plans.”
Nineteen-year-old Darby Duncan is finally on her own. Her boyfriend of six years just left for a high-powered summer internship, though in reality he’s been absent for much longer than that. This newfound freedom wasn’t a part of Darby’s plans, but as she’s come to discover, plans only exist on paper, not in reality.

And guys like Torin Westbrook aren’t supposed to exist in reality, either. But he does, with his disheveled curly hair, irresistible dimples, and endearingly quirky habit of reciting quotes from classic movies and ancient thinkers. When Darby meets Torin as a fellow counselor at the survival camp she impulsively applies to, she’s certain his main goal is to turn her world upside-down.

But Darby’s not sure she can adapt to Torin’s ways of viewing his past and the tragedies he’s faced. Because she’s had her own share of heartache, too, and as much as she wants to believe that it’s all been for a purpose, her grief hasn’t allowed her to get to that point. Yet the more Darby is around Torin, the more she craves the freedom to break out of her carefully constructed routine and mindset and fall into something new.

She’s just not sure that she should be falling for Torin along the way.
Goodreads: http://www.goodreads.com/book/show/18486040-the-rules-of-regret?ac=1 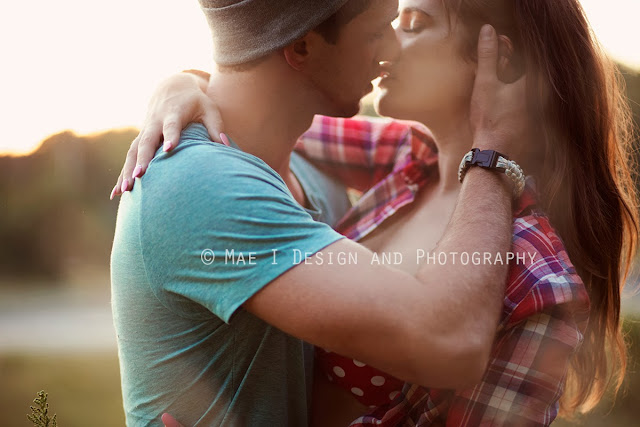 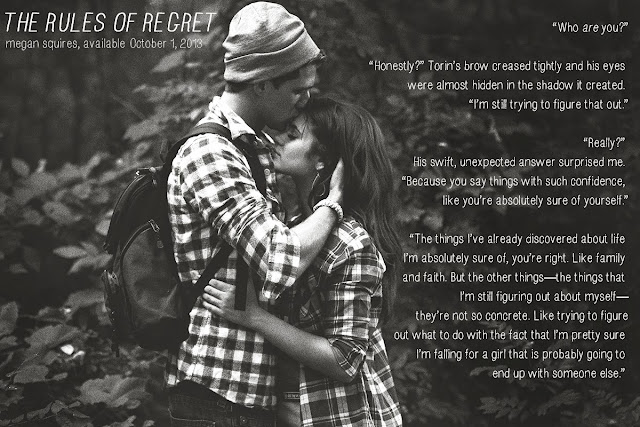 Excerpt
“Stomachache?”
“Nah. I’m fine.”
“Butterflies?” he smiled.
“What?”
Yes, there was a growing swarm of butterflies ramming about in my ribcage, but Ihadn’t expected Torin to not only acknowledge it, but point it out, too.
“Do I give you butterflies?”
“No, Torin,” I lied through my teeth. “You don’t give me butterflies.”
“You sure? 'Cause you give me bumblebees.”
“Bumblebees?” I angled my head his direction, but we were close and if I moved any further our noses would touch.
“Yes. Butterflies are too light and fluttery.” He must have moved because suddenly that gap was nearly nonexistent. In was definitely not the same as on. “You make me feel like I have a freaking hornets nest buzzing and stinging at my insides.”
“That’s a weird thing to say.”
“But it’s true. It’s practically painful to be around you.”
“And that’s a mean thing to say.”
His hand dropped onto my cheek and I went instantly rigid, like there was some electrifying jolt that spread out from his fingertips. “It’s not a bad kind of painful. It’s a good kind.”
“How can any pain be good, Torin?” But the searing heat of his palm on my face answered the question. The physical contact was extreme in a way that bordered on painful, but that had to be because it was something that couldn’t be realized, something that couldn’t come to fruition. The fact that things would stop at just this, that was what caused the bittersweet intensity. It was the absence of what we wanted to happen that truly brought about thereal pain.
“You tell me. How does this make you feel?” He inched his face closer to mine, his hand still laying against the slope of my jaw. “When I do this... “ He titled his head just slightly, his lips lined up with mine. “When I get this close, but stay this far away... “ Not moving another millimeter, he spoke softly, “ ...does it give you butterflies, or does it give you bumblebees?”
I gasped, then became overwhelmingly embarrassed by the fact that I’d just literally gasped at the thought of kissing him.
“Right,” he said coolly, running the tip of his tongue across his bottom lip, leaving it there in the corner edge of his mouth, nearly biting down on it. “I thought so.”

AUTHOR BIO:
Megan Squires lives with her husband and two children just outside of Sacramento, California. A graduate from the University of California, Davis, Megan is now a full-time mother, wife, and dreamer—though her characters don’t often give her much opportunity to sleep.
Visit www.theoutlierchronicles.com to learn more about her latest young adult series.