Review : Out from under you by Sophie Swift 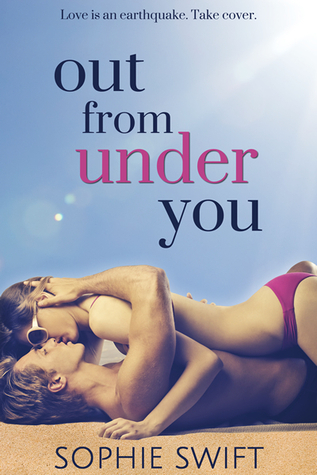 “Love is an earthquake. It comes when you least expect it. It rips the ground clear away. Right out from under you.”
The day Lia Smart met Grayson Walker, eight years ago, was the day she fell helplessly in love with him. Coincidentally, it was the same day Grayson fell in love with someone else: Lia’s smarter, sexier, superior-in-every-way older sister, Alex.

Now, nearly a decade later, Alex and Grayson are long over and twenty-two-year-old Lia has finally managed to forget all those lonely nights she spent pining after her sister’s boyfriend. But when Grayson unexpectedly arrives back in town with Alex for Labor Day weekend and the two announce that they’re not only back together but engaged, all the feelings that Lia buried suddenly come bubbling back to the surface.


But Lia is no longer the awkward, gangly tomboy she was at fourteen. Far from it. And Grayson is conflicted by the lustful thoughts he’s now having for her. He knows he could never act on those thoughts, however. Grayson has always prided himself on being one of the “good guys.” But as the weekend wears on, he’s finding this new grown-up version of Lia more and more impossible to resist...

Heartbreaking and sexy with a dash of humor, Sophie Swift crafts a passionate, unforgettable tale about desire, growing up, and the kind of love that shakes us to the core.

This so so.. hot to read!!  I'm so in love Grayson!!! His first thoughts about Lia,make me blush LOL!!
But his situation is not bright because he saw Lia after 4 f*cking years and he think she's f*cking hot! But this thoughts confuse him because she's Alex's little sister Lia a.k.a Lil' Killer.


This could be bad.
Very. Very. Bad.
The sad thing is, Grayson isn't there for her. He is there, with Alex, to announce their engagement.
And Lia's feeling come all rushing in...near him, she still feels the awkward 14 year's old with the biggest crush on him.
But does Grayson sees her the same way?
So, years later, when Lia finally thought she was over Grayson, he is back in her life and worse: he is engaged with her sister.

She didn't think that Grayson has a feeling for her. But he has and in the end she learns.
Alex is totally bitch! I never read like that girl in my life(never?)

To try to describe sex with Lia is like trying to describe air. Water.Fire. You breathe it. You drink it. It burns you.

Holy Cow! Lia and Grayson has a words are not enough their relationship!All you have to is read this book so maybe you can described it, maybe not...

Sophie Swift is an East Coast girl who recently transplanted to Southern California. She writes about sexy boys by day, and dates them by night. Her sizzling, new adult romance, OUT FROM UNDER YOU, the first in a new contemporary series, is available NOW! She loves books that quicken her pace, music sung by adolescent boys, and cupcakes with too much frosting.