Change of heart by Mary Calmes 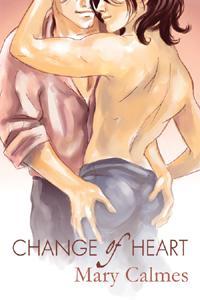 As a young gay man—and a werepanther—all Jin Rayne yearns for is a normal life. Having fled his past, he wants nothing more than to start over, but Jin’s old life doesn’t want to let him go. When his travels bring him to a new city, he crosses paths with the leader of the local were-tribe.

Logan Church is a shock and an enigma, and Jin fears that Logan is both the mate he fears and the love of his life. Jin doesn't want to go back to the old ways, and mating would irrevocably tie him to them. But Jin is the mate Logan needs at his side to help him lead his tribe, and he won't give Jin up so easily. It will take time and trust for Jin to discover the joy in belonging to Logan and how to love without restraint.

“I love you" I sighed, unable to keep the smile from my face,leaning back and looking at him through heavy-lidded eyes. "I really do".
"I know", he grunted, very pleased with himself. “You can’t live without me. I’m like cheese.”


I truthly love this book.It's a great story. In the begining it's hard to understand but in the middle you say ' WOW ' I love logan and I Jin. They are True-mate.
The thing I don't understand is Okay you're never being with a man but you know what to do in sex? HOW?! YOu found out you're true mate is man ans you never overreact? WHY?!
This is the first book I've read by Mary and I really enjoyed her writing style. I loved Jin - he was a great quirky, intelligent character and put together with Logan - just totally hot. I liked that he didn't completely conform to his mate's rules and ways, just enough to show he was where he should be and was happy to be there. He'd been through so much already - so many trust issues and abandonment, not to mention abuse, but now I think Logan will take good care of him. Logan, himself, was so likable and displayed a lot of emotion compared to other alpha shifters I've read, and yeah, I really liked those qualities in him. I've never read any shifters except wolves so panthers was a nice and interesting change.What the writer Mary Calmes is the world of drawing us werepanthers, shapeshifters who lead a normal life in California but they have to deal with rules and laws of the "tribe". There is of course a "Semel" the alpha male who leads his people and there is the figure of "Reah" true friend of Semel. This character is described almost as a sacred figure, respected by all and everyone listens and the one that will love and support the Semel for life. Reah now generally indicates a woman but his ability to give thought to a man, Jin, this character. And as a man Jin has been banned by his family and the tribe as if it was abomination, with Crane, his long-time friend, will study and work taking care not to stay long enough in one place and be in a position to disclose Reah his being. Because he wants to be free to choose the person to be loved and wants to be respected for himself and not because a sacred law dictates it. But secrets can not be maintained forever and Jin will face three of the area in which Semel is now living.
The meeting with Logan will be the decisive one, however: at first glance Jin knows what will be his Semel, and become your Semel-re , the leaders blessed to have found his Reah. Of course, initially there will be some disruption to the family and the tribe of Logan, but the latter will recognize immediately that Jin was his companion and will be ready to defend with their lives. And 'This is a very intense story, where feelings of love, friendship and sense of honor are very defined. But it is also able to weave fantasy and reality, the everyday rituals and mythology that made me love this story.
Jin banished from the family for being gay (and Reah) brings us back to the issue of discrimination is still widespread today. People who are called different, some abominations, just because they have shared sexual habit. I love the character of Jin because it is sweet but tough, because he has a soul kept pure despite the humiliation, because it is a panther and a strong man not afraid to show his a tender heart. Logan is rather strong that the man responsible for so many people, that respects the law, but it is also the man who will love Jin regardless of what others think. Crane is the faithful friend who has always been next to Jin, and who knows him deeply. As always in his books Positive feelings are accompanied by the passion and sex, which is the sealing of a union of love. Being werepanther paranormal and talking about, there are scenes of action and dynamics of conflict animal and strife, but this is dosed in a plot that involves you and seduce you thanks to a smooth and linear writing. If there's one thing I found in this book is bad because the cover does not give any indication of the plot, even misleads the reader imagines that the contents of racconto.


“It was surprising to hear it from his lips, my plain, ordinary name spoken as it never had been before, with awe, lite it was sacred, like treasure. Like I was treasure.”