A Witness’s Submission by Jessica Frost 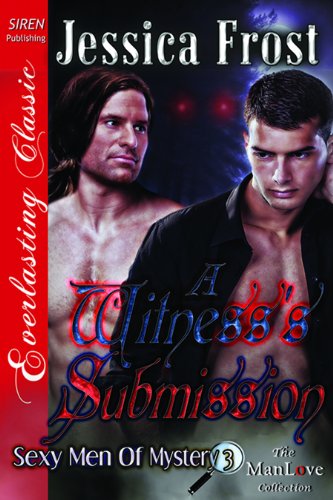 After witnessing his father’s murder, Victor Bronte runs for his life. He hides out in a pub where he meets Mark Murphy, a charming, handsome guy who’s had his share of bad luck. They quickly hit it off, making Victor forget the killer’s after him.

Mark Murphy’s been wallowing in self-pity ever since his cheating ex broke his heart. When he meets Victor, the sexy hunk who offers him a supporting ear and a drive home, he quickly forgets his woes and becomes smitten. As their love blossoms, they promise to take things slow. Not an easy feat when the urge to tear each other’s clothes off and make passionate love dominates their every thought.

But that’s the least of their problems because the killer’s still out there, and now he has a new target. In order to protect Mark, Victor has to give the killer what he wants. But he has to figure out what it is first. To do that he has to go back to the very place his father was murdered. Time is ticking, and so is the killer’s patience and desire for blood.

Book one and Two Review


OMG! I have no idea what I'm going write about it!I'm currently in a shock! This is a surprise because I gave 4 stars Jessica Frost's other book in this series. I gave it because I didn't felt vampire reality. But Now I felt it.Of course not particularly but that's okay for me. I gave it 5 stars for this book because of Mark and Victor. They have a big issues. They can go on their life. Victor's father has been murdered by a Red eyes evil and Mark's boyfriend(ex) cheated him and Mark somehow can over him.At least he wanted over him.
Victor wants to find why he killed but his six senses know that that killer watch him.Victor feel him every inch...

One day Victor step on a Irish pub.Then he meet a bartander Shawn. Oh,His accent such a cutie! Shawn says 'Howdy' *melted* they meet that way. Then Mark comes. Mark is Shawn's little favorite brother. Shawn's said that way!But Mark,Shawn's only brother.Anyway Shawn's has a big ego and that suits him. Shawn introduce Mark to Victor. When their Eyes meet they thought other one is handsome. How gay is that? LOL!!
Anyway I love every inch too LOL I meant the book :D
I say Hi to Jessica and This is really deserve 5 stars!
Can't wait to read The Sex Doctor!!