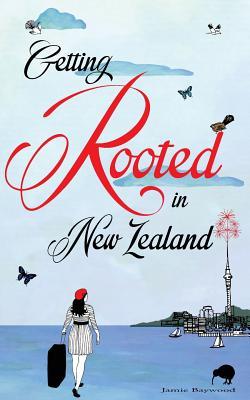 Getting Rooted in New Zealand by Jamie Baywood

Craving change and lacking logic, at 26, Jamie, a cute and quirky Californian, impulsively moves to New Zealand to avoid dating after reading that the country's population has 100,000 fewer men. In her journal, she captures a hysterically honest look at herself, her past and her new wonderfully weird world filled with curious characters and slapstick situations in unbelievably bizarre jobs. It takes a zany jaunt to the end of the Earth and a serendipitous meeting with a fellow traveler before Jamie learns what it really means to get rooted.


Q: Hi Jamie, first of all we want to get to know you, can you describe yourself?
I’m from California. For the past three years, I’ve been disassembling and reassembling my life
by moving to different countries. I’ve lived in five countries now; America, American Samoa, New
Zealand, Scotland and now England.

Q: I assumed that you like the travel, is that right?
It was always my dream to live abroad when I was growing up in California.

Q: Why do you want to go another state? California is wonderful place.
I actually haven’t seen many other states.  I wanted to have some me time and an adventure.

Q: Why New Zealand then?
I had bad dating experiences in California and read in a New Zealand tour book that the country’s
population had 100,000 fewer men than women.   New Zealand seemed like a good place to have an
adventure and some much needed me time.
For a single female traveling alone, New Zealand is one of the safest countries in the world. I might
not have understood people’s accents initially, but I was able to get off the plane and land on my
feet quickly. I got a job and a place to live within two weeks of arrival. I don’t know anywhere else in
the world you can do that.

Q: The weirdest person you met in New Zealand?
There is a character in the book that I call Bob the Mime, he was one of the weirdest people I met.
Recently on Twitter, the characters in Getting Rooted in New Zealand are described as, “Wicked.
Lots of heroes and villains. It’s a story you can read again and again- it’s laugh out loud shocking in
parts and cringe worthy, some office peeps are monsters!” by Colin Mathura-Jeffree, a male model
and judge for the TV show New Zealand’s Next Top Model. Colin is one of my favorite characters
that I meet in New Zealand.
I had good, bad and weird experiences in New Zealand. I’m grateful for all the people I encountered,
heroes and villains, the experiences I had turned me into a writer.

Q: Why ''Getting rooted''?
In New Zealand, I had a lot of culture shock.  One of the most memorable moments was learning
the meaning of the Kiwi slang word “rooted.” One night I was brushing my teeth with my flatmate
and I said, ‘I’m really excited to live in this house because I have been travelling a lot and I just need
to settle down, stop travelling and get rooted’. He was choking on his toothbrush and asked me if I
knew what that meant because it had a completely different meaning in New Zealand than it does in
the States.

Q: Are there any other place you want to go?
I want to go so many places. The thought of living in once place for ever seems foreign now and
makes me feel claustrophobic. It would be fun to be a tourist again rather than dissembling and
reassembling my life and taking all my belongings with me when I move internationally.  I’d love to
be able to tour around Europe.
I currently have to live in the center of England. I desperately miss the ocean and being warm at
the beach. I really miss the warm, friendly nature of the people in the South Pacific. I would love to
see more Pacific Islands, and travel throughout Micronesia and Melanesia.  I had the chance to visit
Australia briefly after I lived in New Zealand. I would move to Australia or back to New Zealand in a
heartbeat.
I've been to Costa Rica and Peru on short holidays; I would love to see more of South America
and Central America.  I absolutely want to go to Yucatán peninsula in Mexico and see the Mayan
ruins.  I’d like to go to the Caribbean.
As strange as it may sound, although I’m American I haven’t been to many States. I want to go to
Alaska, New York, see the Grand Canyon, New Orleans, Miami, Austin, Chicago, Portland and Seattle.
I hear Canada is amazing.  It looks like I need to sell more books to buy plane tickets!

Q: Booker question one, what’s your favorite book and favorite author all time?
Traveling alone and being celibate for a year was how Elizabeth Gilbert found her husband in Eat,
Pray, Love. I probably took it too literally like an instructions manual, but it worked for me.

Q: Booker questions two, What's genre you like to read?
I also enjoyed reading Area Code 212 by Tama Janowitz, The Buddha, Geoff, and Me by Edward
Canfor-Dumas, and Even Cowgirls Get the Blues by Tom Robbins.

Q: Last question, I heard that you're working on your second book. Is it Travel book too?
I plan to publish another book next year about attempting to settle in Scotland.

Thanks for answering all the questions :) It's so lovely to talking with you.I hope you can success on your book.