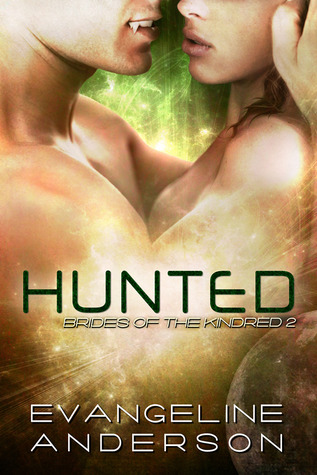 A desperate girl on the run with nowhere to hide... A warrior who has made a vow never to claim a bride... Sophia Waterhouse is being Hunted and the only man who can save her is the one she fears the most...

Sophia Waterhouse has always been afraid of needles and vampires so there’s no way she wants anything to do with a modern day Count Dracula—even if he does come wrapped in the package of a huge Kindred warrior with blond hair and ice blue eyes. She’s only on the Kindred Mothership to participate in her sister Liv’s wedding and that’s all.

Sylvan is a Tranq Kindred who has made a sacred vow never to call a bride. After a devastating rejection on his home planet, his heart is a block of ice no one can melt—or so he thinks until he meets Sophia.

When their ship is forced down in the middle of a rugged mountain range Sophia and Sylvan are stranded. Running for their lives they have only each other to depend on. Will they give in to the intense attraction between them or will the evil hunting Sophia take its toll? You’ll have to read Brides of the Kindred Book 2—Hunted to find out.

I won’t scare her again, he told
himself sternly. I won’t be the cause of her
fear or her pain. I will protect her and love
her—even if I have to do so from a far. Even
if I am destined never to have her.

As I finish the second book in this series, I'm starting to realize just how well this story is working for me. The world that Ms. Anderson has created with the Kindred is done so well, and at just the right pace. I'm thoroughly enjoying the ride.Hunted is the story of Liv's twin sister Sophia and our resident blonde/fangy honey Sylvan. She's being hunted by the urlich and the AllFather (insert shudder here) throughout the whole book while fighting her developing feelings for the Blood Kindred. We get to travel to Sylvan's home planet, learn a little more about the AllFather and his son Xairn, and even get some set-up for book three, which will deal with Kat and her two twin-hotties.Sophie is scared of EVERYTHING. And this is no exaggeration. She has a few good reasons to be wary of some of these things, but acts like a twelve-year-old the whole time. And as her character develops, you don't start to feel for her. You start to reach for a literary sawed-off to shoot her in the face. I honestly HATED this character, I can not stress how much. I could not fathom why Sylvan needed/wanted her so badly. There was absolutely nothing redeeming about her. UGH. I rate this book in goodreads,I gave four stars because of Sophia.Sylvan is so cute.I love him,really.He deserve a Bride, a love and everything.Sylvan is a tranq kindred who's made a vow to never take a bride. He believes he's in control of his emotions and has a heart of ice until a few stolen kisses with Sophia begins to ignite a spark that he never knew existed.

Forever, Talana.
You’re mine and I’m yours. And I’m going to
want to make love to you like this every day
and every night for the rest of our lives. I’ll
want to bite you too. To fill you with my essence.
Do you mind?